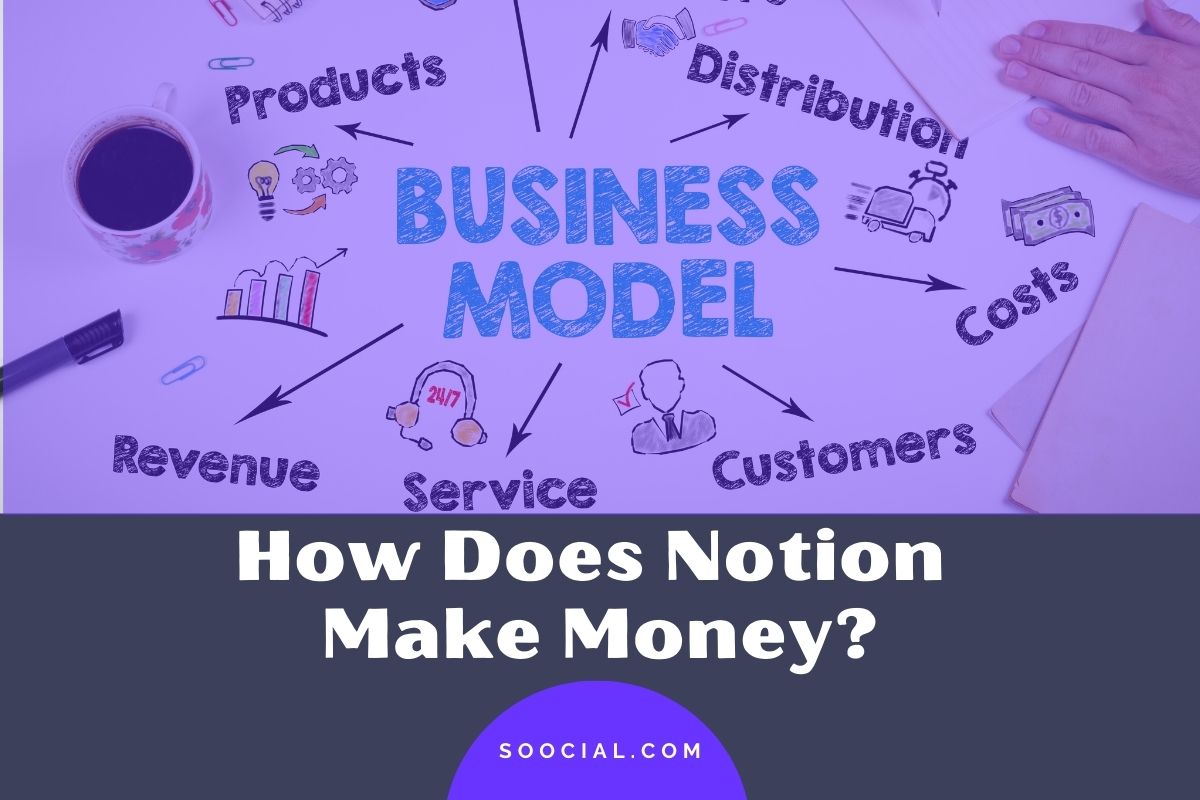 Does Notion have a freemium model? How exactly does it make money? Is it profitable? All these questions are answered as we break down how Notion’s business model works in this detailed blog post.

We’ll walk through some of the big takeaways and then dive into the specifics of how their product, subscriptions, and partnerships contribute to the revenue stream.

Notion is an all-in-one workspace to build wikis, share documents, take notes, manage workflows, and get organized in a single hub. The freemium product makes money from users who want advanced features. The company makes the bulk of its revenue from the Team and Enterprise plans.

Notion is based on a freemium model. This means they offer most of the app’s core functionality for free and charge for advanced functionality. The free version of Notion offers an unlimited number of notes, but it only supports five collaborators at any given time. To get around these limits, you’ll have to pay for the subscription for Personal Pro, Team, and Enterprise version.

Here is the pricing model of Notion:

Notion Labs Inc., the Notion online workspace management software maker, is a private company that does not publicly report revenues, so it is not possible to know for sure if the company is currently profitable. Nevertheless, one article in Medium says the company was profitable in Jan. 2020, which is likely to still be true.

Craft reports that the company started in 2012 and raised $67 million since inception. The last funding round was $50 million in April 2020, with a reported valuation of $2 billion. Index Ventures is an investor in the company.

How Does Notion Make Money?

The Notion system has a free level with a basic limited account for individual use. The paid Personal Pro plan is free for use by students and educators.

The Notion system faces intense competition from other workspace management systems and more comprehensive workplace operating systems. In the educational sector, Notion competes with the software apps of EverNote and Microsoft OneNote.

This table shows the comparison of company valuation between Notion Labs and some of its competitors.

Notion users can earn credits for their accounts by making referrals to the Notion system if the referral starts a free trial that converts into a paid account.

Through this referral program, some Notion users get to use the paid services for free.

The founders, Ivan Zhao and Simon Last started Notion in 2012. The company started with four people, along with the two founders.

Figma reports it nearly ran out of money in 2015. The beta version of the app was not working. It constantly crashed. The app was built on a faulty tech stack that was never going to work.

After struggling for years, the project needed to start over completely.

The founders had to let all the staff go and sublease their office space in expensive San Francisco. They chose to move to the less expensive city of Kyoto, Japan.

For the next year, all the two founders did, for up to 18 hours each day, was write software code using Figma as their design tool. One did the coding, and the other focused on design, and then they swapped places in the effort.

They released version 1.0 of the Notion app for use with web browsers and OS X in 2016. The versions for Windows and iOS were released in the summer of 2017. Version 2.0 was released in March 2018.

Subsequently, the app enjoyed rapidly expanding popularity. It was selected as the top product on Product Hunt and featured in a Wall Street Journal print article. The company had less than 10 employees at that time.

The appreciation of Notion came from the quality of the users’ experience and the minimalistic, intuitive UX design. The home screen is minimal, yet behind each of the icons in the small collection is incredibly powerful functionality.

Without having to code anything at all, users can organize a Notion page to get things done that they need to do.

In June 2018, the version for Android was released. Notion reached one million users by September 2019. Techcrunch says that the company grew to its first million users with a staff of fewer than 30 people. The Medium article says the employee count was only 18 at that time.

Of special note to entrepreneurs, Business Insider reports that the founders refused the approach of venture capitalists in February 2019, putting them off for another year as the user base exploded.

By April 2020, the user base had grown to about four million. Based on a funding raise of $50 million led by Index Ventures, the company’s valuation reached $2 billion.

Forbes reported that before April 2020, the capital raised by the company was only $20 million. Craft says it was only $17 million. The valuation of $2 billion was astonishing because the company had supposedly only recently reached an annualized revenue base of $30 million. The company has now upgraded its staff to just 40 people.

The rapid growth from one to four million users within one year attracted investors’ interest as such a high valuation. The company experienced a surge of new users during 2020 due to the pandemic, as more people had to work and collaborate with others from their homes.

Profitability and Loyal User Base

Notion amassed its loyal customer base, called “Notioners,” through clever branding and community engagement. Its biggest promoters are some of its customers who get account credits for making referrals.

The company hired an in-house graphics illustrator, Roman Muradov, who created a black and white comic book illustration style for the brand.

The illustrations are crisp and give the users a feeling of light-heartedness with a touch of humor. This graphic design goes well with the clean user interface style of the app.

The artist even made fun of the Notion competitor’s elephant mascot used by EverNote by showing user characters sliding off the elephant’s back to try something new with Notion.

This clean style extends to the help and FAQs, which answer users’ questions with minimal text.

Another clever idea was to use the Notion tool to build the Notion.so website. Visitors to the website immediately get to see how the tool is used to organize and present ideas, projects, and workflows.

Design of Notion is accomplished by numerous reiterations of any deliverable to find the best option.

Notion’s staff of copywriters, software engineers, and the in-house illustrator create multiple versions of their work by doing rough drafts, embracing ideas without judging them, and letting the team provide feedback until the ideas are narrowed down to choose the very best one.

Building the Knowledge Base

Nothing is ever deleted by the Notion company. The reiterations are kept permanently. New versions are archived in a searchable manner.

This methodology allows anyone who comes on board later to see the history of an idea’s evolution. It is very simple to navigate any past projects and revisit older ideas.

In July 2019, the company launched the Notion Community page. This page shows many ways that users can get involved, such as:

The desktop version of the Notion system works on both Mac and Windows systems. The mobile version works on both iOS and Android systems.

There is also a web browser extension that is called Web Clipper. This extension allows users to copy any web page for use in the Notion system.

Notion pages work with blocks.  Blocks are sections on a Notion page: a text box, an image, a database, a wiki, or another section on the Notion page. Using blocks allows users to customize the Notion pages to accommodate any team’s needs.

Notion has specific user solutions for different functions, including:

Notion works with Kanban boards, tables, lists, and customs approaches for any workflow. A Kanban board is a technique that provides a visual representation of projects using cards for work items and placing the cards on a digital board. The columns on the board show the project’s progress.

Users can embed over 500 apps inside Notion pages using Notion’s API and hyperlink to anything. This makes it easier to search through an archive of documents to find something.

In 2020, Notion released a Korean language version. South Korea now has the second-largest user base of Notion and is the fastest-growing market for the company.

Conclusion: How Does Notion Make Money?

To conclude, Notion uses a freemium business model. It offers a free version to individual users, and charges organizations who want to increase the capacity of their notion workspace, or use some advanced functionality. There are different plans based on the number of projects and team members you have (starting at $5 per month).

The core value that the Notion app has created is the ability to create, capture, annotate and share ideas in real-time without having to install any additional software. Within it, you can create a knowledge base for employees, plan projects using a visual workflow designer, manage tasks in a kanban board, and much more.

Of course, it has a common set of features that tools like Trello provide as well. Notion has become a hit in the marketing and startup world mainly because of its high-end features and simplicity.

This brings us to the end of this article. We would like to thank you for taking the time and hope you found what you were looking for. If you have any questions or suggestions please feel free to drop us an email.

Have a nice day 🙂

How Does Monday.com Make Money?

How Does Signal Make Money?

16 Trello Statistics to Kick Your Productivity Up (2022)