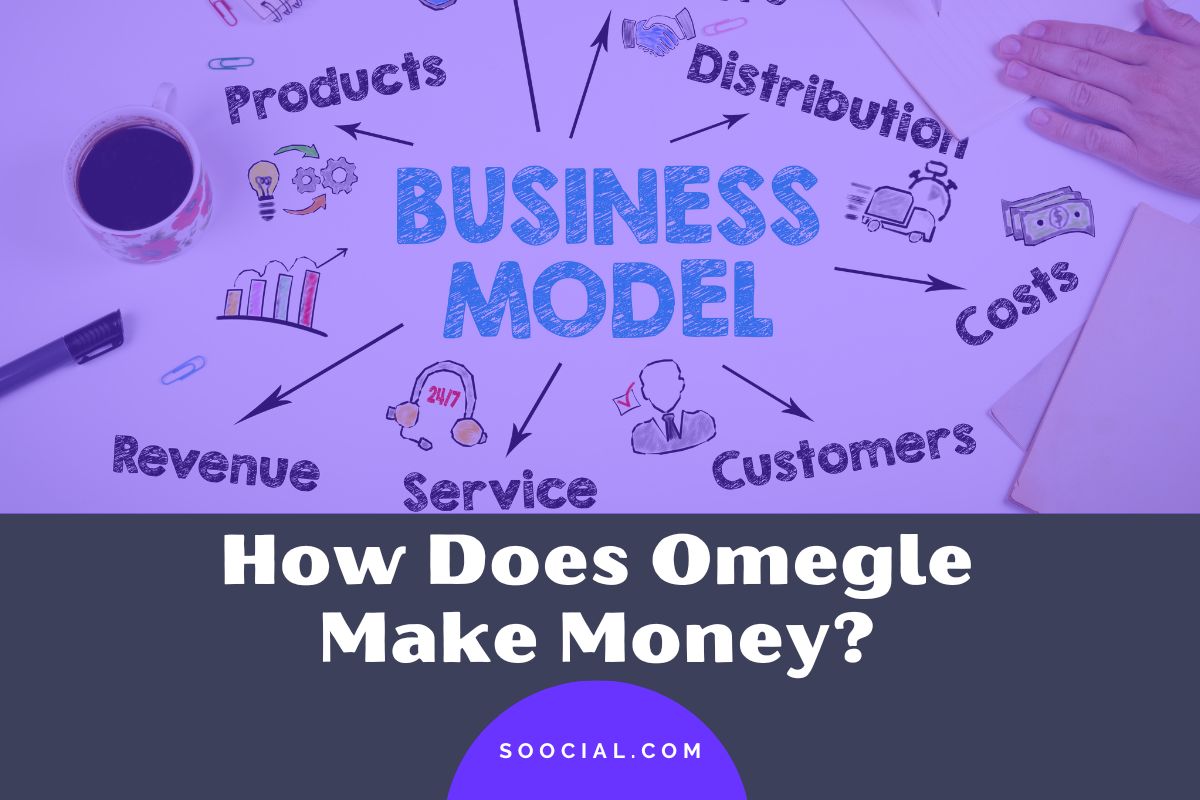 Omegle is a popular free online video and text chat website that users can log onto to socialize. It randomly pairs users in sessions where they can chat anonymously.

The website was founded in 2009 by Leif K-Brooks when he was only 18 years old. Omegle advertises itself as a way to meet new friends by pairing strangers in one-to-one video and text chats based on a random algorithm.

The site averages 94 million monthly visitors or roughly 23.5 million users per week. That traffic primarily comes from the United States. However, India, Italy, Mexico, and the Philippines are other top users of Omegle.[1]

Contents show
What is Omegle & How Does It Work?
Business Model of Omegle
How Does Omegle Make Money?
Advertising
Affiliate Marketing
Omegle Funding, Valuation & Revenue
Is Omegle Profitable?
Conclusion
Sources

What is Omegle & How Does It Work?

Omegle is a free online video and text chat platform where users go to randomly be paired with strangers for anonymous video chats.

Getting started on Omegle is easy. Users just navigate to the site and choose whether they want to start a video or text chat. They can also add interests that they would like to chat about to help them find a better match. If Omegle can’t find someone interested in chatting about the same topic, the site will connect you with a random person as it would normally do.

For video chatting, users need a functioning webcam and microphone. After that, users are connected with a stranger that they can immediately begin chatting with over text or video. When their chat partner comes up, they are named ‘Stranger’ in the chat.

At any point during the conversation, participants can click to stop the session. For this reason, it’s common for Omegle users to suddenly end chats. Many people actually browse through several users before picking someone that they want to chat with.

Omegle has some options and features that can help users find more appropriate conversational partners. For example, users can add their college email address to enter a student chat. When doing this, users will get an email to verify that they are indeed a student.

Omegle also allows users to spy on others. Users can choose the spy/question option and be entered into other people’s chats. You can add a discussion question to their chat to see what others have to say about that topic.

The platform has a few rules that govern its use. Users must be over 13 years old and have their parent’s or guardian’s permission to use Omegle if they’re under 18 years old. Omegle also prohibits the transmitting of obscene materials or using their platform to harass other users. They also require that users not do anything that is illegal according to their national or local laws.

Omegle claims to monitor video but also offers unmoderated and adult sessions where the video is not monitored. It is unclear whether Omegle’s popularity is driven primarily by the use of the general or adult version of their site.

Because users are anonymous, Omegle is known for bad behavior by other chatters. People often complain about being insulted or treated badly on the site. However, the ease of disconnecting from a chat means that users can potentially easily escape from bad actors on the website. The problem is that underaged users could connect with people who seem friendly initially and gain their trust.

The site has frequently been cited as unsafe because of the risk of viewing inappropriate content, the lack of moderation on their video chats, the danger of having metadata related to images or tests hacked from users’ computers, and the potential exposure of personal information.[2]

Indeed, many local and state law enforcement agencies have warned the public about random chat sites like Omegle. The sites saw a surge in popularity in 2020 when some popular YouTube and Tiktok users started using similar websites to create video content. Law enforcement then saw a surge in reports of cybercrime and child luring connected with these sites.[3]

The site has also been identified as a place where child sex predators have gone to prey on teenagers. A Canadian man was convicted of abusing an underage girl via the site starting in 2014. That led to a 2022 lawsuit against the company for $22 million by the victim. Just 11 years old when she was paired with a man in his late 30s via the site, the abuse lasted three years.[4]

In 2021, when a child protection center did a search, it found 170 videos from Omegle of children that appeared to be between six and 15 years old that were being traded on dark web forums.[5]

Omegle’s business model is to offer a free chat platform to connect with others socially in order to generate a dedicated user base. The company does not require user registration, and it doesn’t offer paid or subscription features.

This increases the likelihood of people using the service and increases the site’s traffic. Indeed, it is estimated that the site averages 94 million monthly visitors or around 23.5 million users per week.[6]

The company then finds various ways to monetize that audience. Advertising is Omega’s core monetization strategy. While others have speculated that Omegle might make money user contributions, no one has found proof that they are indeed doing so.

While the company claims it monitors video chats for those under the age of 18, the number of reported incidents on the site would suggest that their monitoring isn’t very effective. The company also has an unmonitored video chat that can include nudity and sexual content for those over the age of 18. Their unmoderated chats are likely the source of a significant amount of the site’s traffic, although Omegle doesn’t release a breakdown of usage.

The website’s business model likely appeals to people who are lonely and looking for friends. It is not the first random chat website to gain popularity. Chatroulette is another popular site that randomly pairs strangers for video conversations. Other sites include Camsurf and Chatspin. Each of them has faced controversy over similar issues with safety, especially for underaged users.

The current $22 million lawsuit filed against Omegle for its role in child sexual abuse opens up questions around the liability involved in running a company with this business model. While the suit has yet to be decided in court, if Omegle loses there is a chance that it could bring additional lawsuits against the company by others who may have experienced similar harm. Whether that would cause Omegle to go out of business or shift its business model remains to be seen.

Omegle is a private company and does not release its financials, so it is unclear how much the company spends on expenses. Given the site’s simple design, the majority of its expenses likely go towards the cost of hosting and monitoring chats.

Since Omegle seems to have never raised funds via venture capital, it is likely that the company makes more than enough money to cover their expenses.

How Does Omegle Make Money?

Omegle makes money in two ways, via advertising and affiliate marketing. As Omegle is not a public company and does not release their financial information, it is unclear how much they make from these revenue sources.

The majority of Omegle’s 94 million monthly visitors are based in the US. That means that the company can likely make a premium on advertisements. However, given the nature of the site and the controversy that surrounds it, large companies likely don’t allow their ads to populate on the site.

Omegle does not have its own advertising network but instead includes advertisements on its site via other unnamed digital ad networks. It is unclear how much the company generates from advertisements.

Affiliate marketing is when a company is paid a commission or referral fee for sending customers to another company’s site. In Omegle’s case, they have affiliate links that seem to primarily send visitors to adult webcam sites.[7]

It is unclear if they get an affiliate fee for just sending traffic to other sites or if they only make money if the traffic they send there make purchases.

It is unclear how much Omegle might make from this source of revenue.

Omegle is currently a private company and has never released any information about it’s financials to the public. However, some have estimated that based on the site’s traffic Omegle could make up to $216 million annually from cost-per-click ads.

Because this is an estimate, Omegle’s actual revenue could be considerably more or considerably less than this. It is likely that Omegle made more money in 2020 during the pandemic when more people were using chat sites like Omegle to combat loneliness while social distancing.

It is also unclear what Omegle’s valuation might be since there are so few financial details about the company available. Omegle has also not raised money via venture capital.

The company’s expenses are likely relatively conservative and easily covered out of their existing ad revenue. They, therefore, have not required venture capital funds to cover their expenses or grow.

Omegle is profitable. While the company has never released details about their revenue or other financials, Omegle has also never raised venture capital funds. That seems to suggest that the website is generating enough revenue to cover its expenses.

However, it is impossible to know just how profitable Omegle could be. While some have suggested they could make as much as $216 million per year in cost-per-click ads alone based on their web traffic, the actual number could be much higher or much lower.

In conclusion, Omegle makes money by selling ads on their website and connecting users to third-party websites for affiliate commissions. It’s a pretty straightforward business model.

We hope you enjoyed this blog post about how Omegle makes money, and we’re excited to hear your thoughts. If you’ve got any questions for us, just let us know! We love hearing from our readers, and we’ll do our best to respond as quickly as possible.

Whether you’re looking for a quick chat or something more serious, don’t let the stigma surrounding Omegle hold you back from trying out one of the best ways to meet new people!

How Does Tinder Make Money? Business Model of Tinder