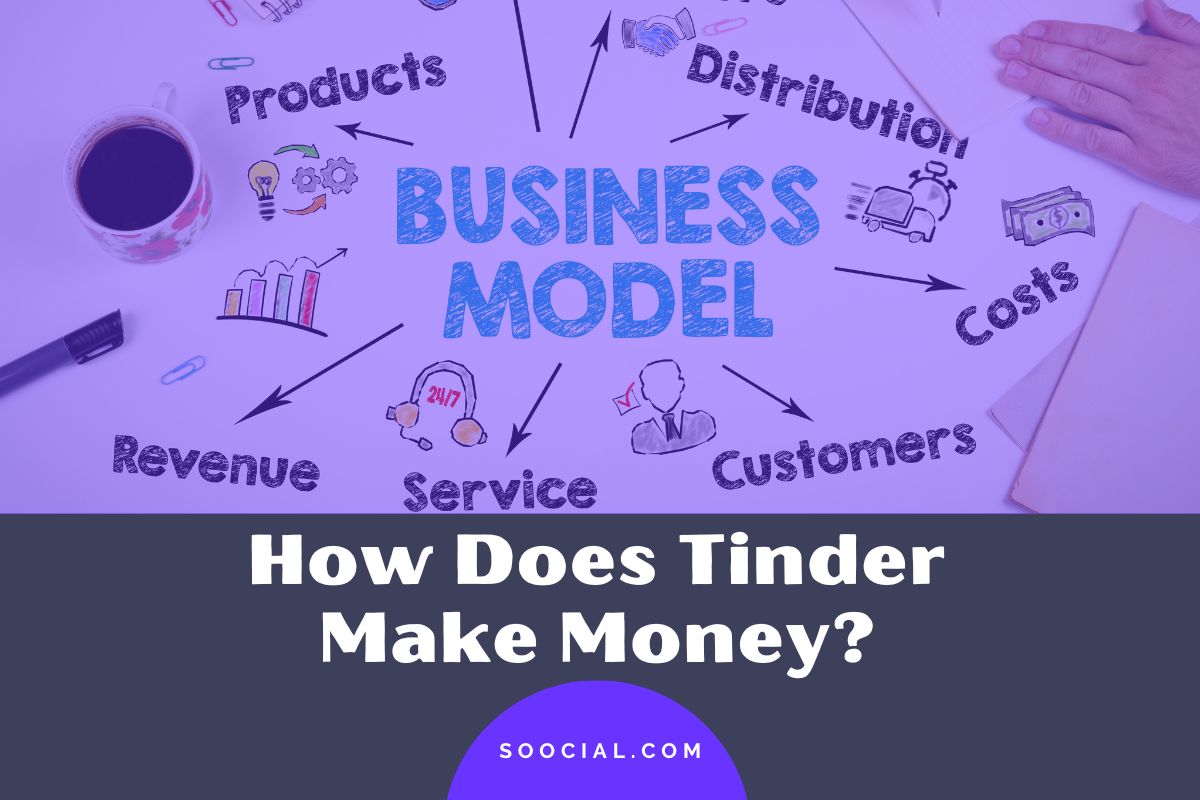 Tinder is a popular online dating app and website. It reinvented the business of dating by coming up with the idea of swiping right or left to indicate interest.

The company was founded by Sean Raad in 2012 at a hackathon held at Hatch Labs, a startup incubator, in West Hollywood. Tinder was originally called MatchBox, but the founders decided the name was too similar to Match.com. The co-founders and early employees renamed and rebranded the company. They kept the flame-themed logo for Tinder.

Tinder boasts over 75 million monthly users. In the first quarter of 2022, it had 10.7 million subscribers. This is far more than any other online dating app. In 2021, Tinder made $1.65 billion in revenue, three times more revenue than Bumble, its closest competitor. [1]

What is Tinder & How Does It Work?

Tinder is an online dating platform and app. Users join to meet like-minded people for romance and possible long-term commitments. Tinder is most popular with younger males. In the United States, 35% of its users are aged 18-24, and 75% of its users identify as male. [2]

Dating apps have become steadily more popular worldwide since 2016. In that time, dating apps have seen significant growth in both user base and revenue share. In 2021, there were 323 million users of dating platforms worldwide. [3] Dating app revenues reached $5.61 billion in 2021. [4]

Tinder and Badoo have vied for total global user share since 2015. Tinder is currently the most popular dating app in the North American and U.S. markets. Badoo has won the user base in Europe and South America.

Users use Tinder to browse potential matches based on factors like location and interests. The app uses geotagging to showcase matches a set distance away from the user. Users join looking for everything from casual hookups to potential marriage.

Users sign up on the website or download the app to their phones. They can use their phone number or email address to create a Tinder account. Users are encouraged to upload a selection of photos and provide a short bio.

After signing up, users can browse the profiles of other users, swiping right on profiles they like and swiping left on profiles they don’t. If both parties swipe right, a match has been made. Tinder was the first dating app to design and patent this swipe technology.

Users appreciate dating apps such as Tinder over traditional dating or more complicated dating apps because it is user-friendly. Since users don’t know if someone has swiped left on them, rejection is anonymous. It can be faster and easier to find a date on Tinder, particularly for younger users. Tinder claims that 1.5 million of its users go on dates every week.

Because Tinder is based on proximity, it has developed a reputation as a hook-up app and even a place to commit fraud. In 2022, Netflix released a documentary called The Tinder Swindler detailing the crimes of conman Simon Leviev. Leviev, born Shimon Hayut, used the app to meet women who he manipulated into financially supporting him.

Since Tinder was launched, the app has become a key part of many people’s social life. However, there is controversy over whether the app’s design facilitates connections or just browsing through profiles. Psychologists have even studied whether Tinder swiping might be addictive.[7]

Unfortunately for their partners, 30% of Tinder subscribers are married. While some might be in open or non-monogamous relationships with their spouses many might be using the app without their partner’s knowledge.[9]

The business model of Tinder is what is known as the freemium model. Users get basic features for free in order to incentivize a large number of people to use the app. This ensures a sizeable number of potential partners are available for users who sign up, which provides a larger potential dating pool.

Users are encouraged to upgrade to a subscription plan to access more features and functionalities. Tinder limits what features are available in the free plan to encourage users to purchase the premium services and enhance their experience even more.

Whether users are looking for a long-term relationship or a hookup, the ability to pay to see which potential matches like you or to have an unlimited number of likes on potential matches encourages many users to pay. Tinder has 10.7 million paying subscribers in the first quarter of 2022. [10]

Tinder earns most of its revenue through its tiered subscription offerings and in-app purchases like unlimited daily scrolling. Users can pay for individual services like Super Likes and Profile Boosts.

Tinder’s subscription plans are also more expensive for users who are aged 30 and older. This helps incentivize the use of these features by people who have less disposable income.

Although Tinder introduced many of the features that are now standard across similar dating apps and sites, the apps themselves are not significantly different in the features they offer.

Tinder competitors like Bumble and Grindr copied much of Tinder’s basic functionality and features, simply giving the options different titles. Bumble’s subscription tiers are titled Bumble Boost and Bumble Premium, while Tinder has three tiers, Plus, Gold and Platinum.

Tinder rival Bumble, which was founded by former Tinder VP Marketing Whitney Wolfe Herd, has attempted to differentiate itself with women by allowing them to message first in a potential match.

Tinder is owned by Match Group Inc., a conglomerate that also owns the matching services Match, Hinge, OkCupid, and Plenty of Fish. Match Group is a powerful player in the online dating market. The company owns and operates over 45 global dating companies. Its flagship app, Tinder operates in over 190 countries and 40 languages. Tinder’s largest user base is in the U.S., followed by the U.K.

Tinder holds 72% of the U.S. market share, easily beating rival Bumble at 19%.[11] Tinder has maintained its majority market share among U.S. dating apps for the past five years. However, as the user base of rivals, Bumble and Hinge has grown in that time, Tinder’s dominance has decreased. The company faces intense competition from Bumble, Hinge, and Badoo.

Tinder rival Bumble recently acquired its first subsidiary Fruitz, which has been described as a dating app for Gen Z. That could put it in a better position to compete against Tinder in the future.

Tinder’s business model has been very successful at generating increasing revenue. The company reported revenue of $1.65 billion in 2021, up from $1.36 billion in 2020.[12]

How Does Tinder Make Money?

Tinder makes money in different ways. These are through its Tinder Plus, Tinder Gold, and Tinder Platinum subscriptions and its Super Like, Boost and Read Receipt features.

Tinder does not break down the sources of its revenue, so it’s unclear how much of it comes from the company’s separate income streams.

Tinder makes most of its funds from subscriptions. While the platform is free to use, getting a subscription makes using the platform easier and gives you increased access to potential matches.

Tinder has three tiers of subscription: Tinder Plus, Tinder Gold, and Tinder Platinum. The free versions of the app only allow users to match and chat.

Tinder Plus allows users to:

For example, a user might purchase a subscription if they accidentally swipe the wrong way on a promising match or if they want to meet people while traveling for work.

Tinder Gold allows users to access all features in the Tinder Plus tier, as well as:

The additional features that Tinder Gold users can access encourage them to upgrade their subscriptions. For example, the ability to receive new top picks daily could be a selling feature for users eager to meet potential romantic matches quickly.

Tinder rolled out its new top-level subscription plan, Tinder Platinum, in 2020. Along with all the features of Tinder Plus and Tinder Gold, subscribers receive the following benefits:

Users are incentivized to upgrade to Tinder Platinum with bonus features that subscribers in lower tiers do not receive. Messaging before matching and having their likes prioritized over those of other users could give them an edge in meeting potential matches. Tinder is the most popular dating app, and users may want to gain an edge in the dating competition.

Read Receipts let users know whether a match has read their message yet. They can be purchased for $15 for a pack of five, $20 for a pack of ten, or $30 for a pack of 20. Users can opt out of allowing others to see their read receipts.

The Tinder brand is a subsidiary of Match Group, Inc. (MTCH), which is currently a public company trading on the NASDAQ exchange. It had a valuation as of August 2022 of $15.62 billion.

Prior to being bought by Match, Tinder raised $50 million in venture capital funding during three funding rounds.[18] Notable investors include Benchmark and AIC. [19]

Given the popularity of Tinder, that could be due to losses at some of Match’s other subsidiaries, or the company might be prioritizing expansion.

It is unclear if Tinder is profitable. Match Group reported a net income of $280 million in 2021. The company does not provide the net income of each of its subsidiaries.

Tinder’s total revenues have increased every year since its parent company Match Group launched as a public company in 2015. But, even though it generated $1.65 billion in gross revenue in 2021, it isn’t clear that means Tinder generated a profit.

The platform’s expenses could exceed its revenues, or the company could be investing in growth and still be pre-revenue.

Tinder has been around for a while now, but it’s still one of the most popular dating apps out there. Whether you love it or hate it, you have to admit that it has changed the way we date and find partners.

The app’s combination of gamification and social networking has made it one of the most popular online dating platforms in the world, and its business model shows that there is still room for innovation within the dating industry.

The future looks bright for Tinder as they continue to expand into new markets around the world while staying true to their core values: simplicity, fun, and ease of use.

We’d say that if you’re looking for love, you should definitely give them a try!