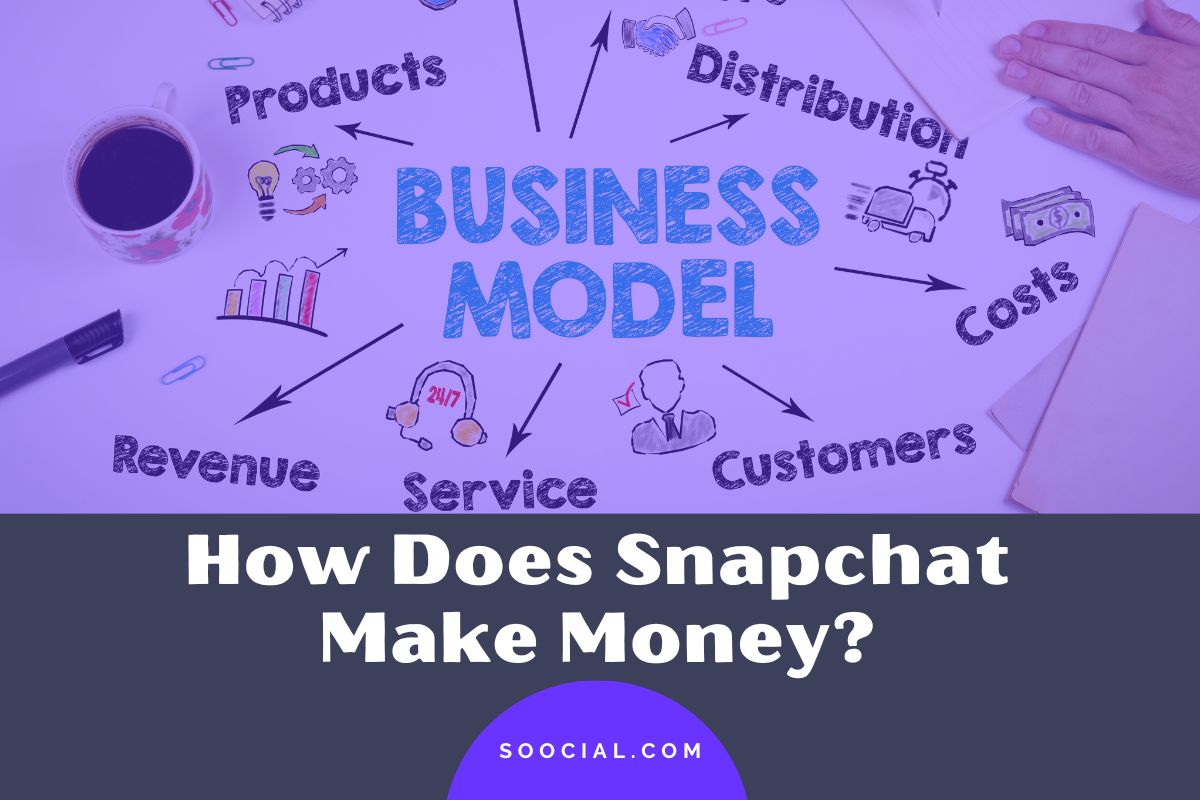 Snapchat is a popular photo sharing social media app that makes almost all their money through advertising revenue. However, they have a few other surprising sources of revenue.

Founded in 2011 by Evan Spiegel, Reggie Brown, and Bobby Murphy, Snapchat is known as a great place to share time-limited photos, create bitmojis, and try out funny filters.

Almost 300 million daily active users log on to see what they would look like as a cat or to show their friends photos or videos of themselves crying rainbows.

What is Snapchat & How Does It Work?

Snapchat is a free social media platform where users can send each other picture, video, or messages that are only available to others for limited periods of time before they disappear.

When a user signs up for Snapchat, they must create what’s known as a bitmoji, or a cartoon emoji version of themselves. They can then add existing or new friends to their account, send people snaps, and post stories to their account.

Snapchat is known for its fun photo filters. Users can turn themselves into animals, have rainbows or hearts come out of their eyes, and change the background of the location they’re on. While some filters are designed to enhance your appearance, most are fun or silly.

Users can chat with their friends via direct messages or message people who they don’t know but meet on the app. You can also play online games alone or with friends.

Because of its focus on augmented reality, many see Snapchat as a part of what’s commonly called the metaverse. The metaverse is a broad term to refer to the internet’s trend towards more immersive, decentralized, and virtually augmented online or real-world experiences.[1]

Snapchat originally took off among teenagers but expanded its reach to some older demographics. However, the platform’s users still remain relatively young. Over 75% of 13 to 34 year olds in 20 of the countries that Snapchat is focused on use Snapchat.[2]

As a social media site, Snapchat’s business model is to offer a free platform to connect with friends and build a community with a goal of increasing its average daily users. The company then focuses on monetizing those users via advertising.

They also have a very different strategy for differentiating their revenue streams. While competitors like Twitter leverage subscriptions to make additional revenue, Snapchat decided to create augmented reality glasses as one of their secondary income sources.

Snapchat, therefore, has a somewhat unique business model with a monetization strategy that few other companies have tried before. Given that they have yet to make up a significant amount of their revenue from their Spectacles, it is unclear if these were good strategic choices.

Snapchat’s competitors include social networking companies like Twitter, Facebook, Instagram, and Tik Tok. These are also all companies that primarily leverage advertising to make money. Snapchat is slightly different because it is focused on photo sharing. Unlike Instagram, it’s more focused on fun photo shares rather than lifestyle photo sharing.

Snapchat has considerable staffing, platform, and development expenses and remain unprofitable despite being a public company. In 2019, the company lost $1 billion, in 2020 they lost $944 million, and in 2021 they lost $487 million.[6]

How Does Snapchat Make Money?

Snapchat makes money in four different ways. These include advertising revenue, the sale of their Spectacle augmented reality glasses, geofilters, and a few other income sources.

Snapchat’s business model is focused on increasing the number of people who use their platform so they can get more advertising or charge advertisers more. In 2021, they brought in $4.1 billion in advertising revenue.

Snapchat’s main value proposition is brand access to its young global users demographic via ads. Snapchat claims to reach 75% of Millennials and Gen Zs globally. Companies can create ads that can be customized to location, demographics, and interests. All they need is a photo or a video to create an engaging ad.

Snapchat offers an ad management tool for advertisers to buy ads that are charged on a cost per impression bases. The daily minimum is $5 per day. They can also pay for ads via action-based outcomes, such as if someone completes a purchase or signs up for something.

Companies can also purchase ads directly through Snapchat via SnapAds. These are video ads that start at $3,000 per month. They can also create sponsored lenses where their information decorates millions of snaps. The price for these ad placements can range from $450,000 to $700,000 per day.

Snapchat also sells something called Discovery Ads, which means that a company’s branded ads can be found in Snapchat’s Discovery tab. These can cost up to $50,000 a day.

Snapchat is one of the only social media companies that also sells a physical product. As Snapchat is known for its fun filters, it created augmented reality glasses called Spectacles where users can see and create immersive visual experiences to post on Snapchat or to experience in the real world.

The glasses offer 3D experiences with video cameras built in so that the person wearing them can share their experiences on the Snapchat app. The glasses cost $500 per pair.

Snapchat sells the ability to create and post the geofilters that are available on its app. Individuals or companies can create geofilters for any type of experience or occasion. For example, you can create a location-based filter or an event-based filter for something like a wedding.

Users and companies can also create augmented reality experiences. While community filters can sometimes be created free of charge, Snapchat charges $5 per day for the majority of filters created by companies and individuals.[7]

Snapchat has acquired a number of companies and generates income from some of those companies. For example, Snapchat acquired a voice assistant app called Voca.ai in 2020. The revenue Snapchat makes from their companies is not explicitly disclosed.

Snapchat (SNAP) is currently a public company after launching its IPO in 2017 on the New York Stock Exchange. However, prior to going public the company went through a whopping 14 rounds of funding and raised $4.9 billion from investors. Some prominent investors include Tencent, Alibaba Group, and Kleiner Perkins.[8]

Snapchat had a market cap of $16.29 billion as of July 2022 with a per share price of $9.88. That’s well below the company’s IPO price of $17.60. While SNAP originally soared to $24 per share after debuting on the market, investors have not been impressed with Snapchat’s financial results or prospects since its IPO.

The company has, ultimately, not lived up to its promise by exhibiting slow user and revenue growth.[9] The fact that Snapchat has yet to make a profit has also garnered criticism. While there has been speculation that a larger company might buy Snapchat and take it private, so far, there has been little interest from companies in doing so.

Snapchat isn’t currently profitable and never has been since it was founded in 2014. That said, the company has been growing their advertising revenue in recent years from just $1.7 billion in 2019 to $2.5 billion in 2020 to $4.1 billion in 2021. Snapchat’s challenge is that their expenses have also been growing at nearly the same pace. In 2020, however, the company cut its operating loss almost in half year over year from 2020.

If they’re able to keep that up, the social media company could potentially become profitable in the future. But whether they succeed will depend on how quickly users grow, how easy it will be to get the company’s spending in check, and how much they can accelerate their advertising sales.

And there you have it! Snapchat has grown from a simple idea to one of the most popular apps in the world. It has been able to achieve this success because of its unique approach to social media, which is now the key to its business model.

Snapchat’s success shows that it is possible for businesses to make money by being different. By doing things differently, Snapchat has been able to connect with people on a personal level and build up a loyal user base that keeps coming back for more.

The bottom line is that Snapchat has made a name for itself by taking a risk and creating a new way to communicate–and they’ve done it in a way that’s made them a lot of money along the way. Even if you’re not a marketer or business owner, there’s something important to learn from this story: if you have an idea, and you think it could change the world, don’t be afraid to try it out!

We hope that you found this blog post helpful, and learned something along the way. If you have any questions about how social media apps make money in general or about how Snapchat makes money, please feel free to let us know.

BeReal — A Social Media App For The Real You