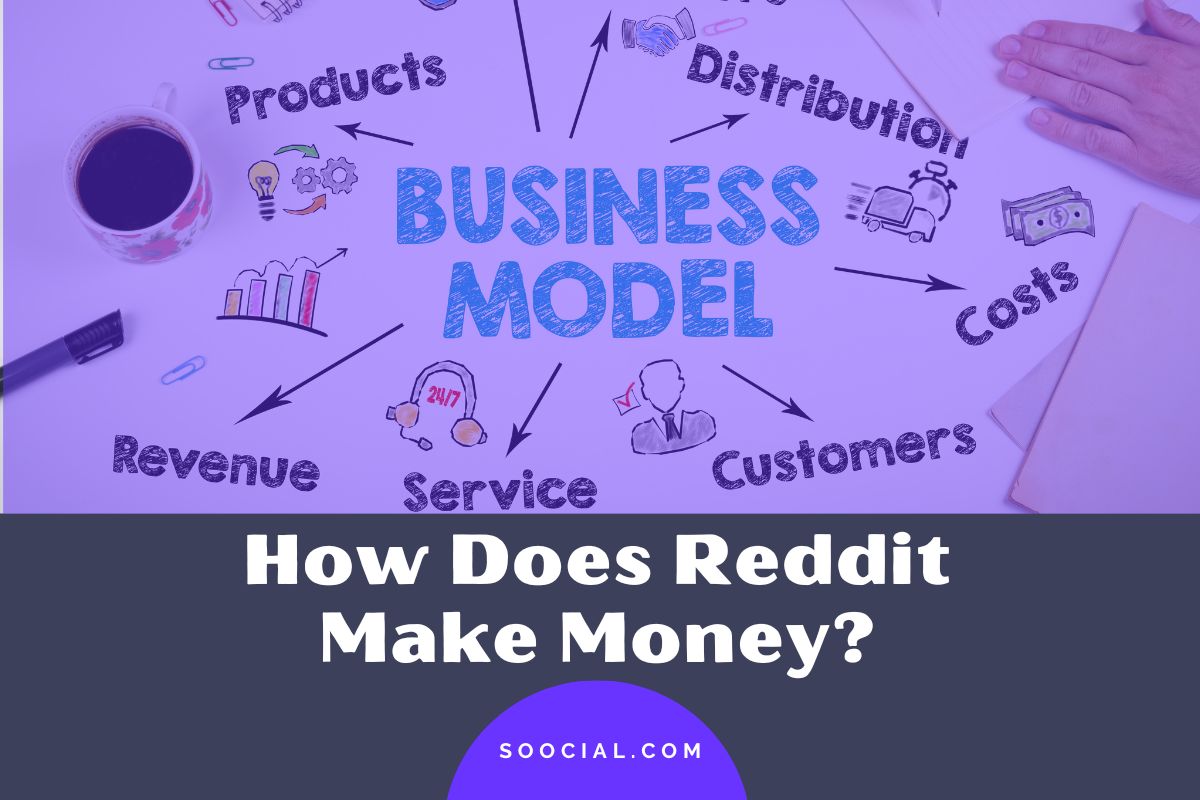 Reddit is one of the internet’s most popular news aggregation sites with forums to discuss things like sports, politics, fandoms, or share the latest memes. Advertising is a big part of Reddit’s revenue mix. But they have a few sources of revenue that you might not expect.

Founded in 2005 by University of Virginia students Steve Huffman, Alexis Ohanian, and Aaron Swartz, Reddit was purchased in 2011 by Advance Publications, Conde Nast’s parent company. Since then, other notable investors have made investments in the company including Peter Theil, Marc Andreessen, and Fidelity. [1]

The company is headquartered in San Francisco, California and led by Steve Huffman as CEO. Currently, Reddit has around 700 employees. As of June 2022, the website was ranked the seventh most visited site in the United States and the eighth most visited website in the world, according to SEMRush.[2]

Its users, known as Redditors, post links, videos, images, news, or written posts within subreddit communities. These are then voted up or down by other members who can also comment on posts.

Posts with the most upvotes end up at the top of a subreddit and even potentially on the site’s front page. The company relies on volunteer moderators to police and develop policy for their subreddits. These moderators are not employees but part of the user community.

Reddit has gotten a significant amount of bad press for allowing certain controversial online communities to thrive on their platform because of their commitment to an ‘open internet.’ For example, CNN once reported on a subreddit that featured photos of underage girls leading to that subreddit being banned.[3]

Reddit has made efforts to close some of the offending subreddits but still often faces criticism around the use of its platform. In 2020, they updated their community guidelines to take action against communities that they claimed were ‘promoting hate’ and banned 2,000 subreddits found to be in violation of those new guidelines.[4]

In 2022, they also banned the use of the word ‘groomer’ to refer to LGBTQIA+ individuals.[5] These changes are likely designed to make the platform more attractive to advertisers as part of their attempt to increase ad revenue.

Despite being the source of frequent controversy, Reddit is one of the most popular websites on the internet. It has 52 million active daily users on average and 130,000 active subreddits.[6] It is sometimes referred to as the ‘front page of the internet.’ Some people claim that most internet memes and culture have a start on the website.

Like many popular websites, Reddit’s revenue streams revolve around monetizing its user base. Reddit’s 52 million daily active users[7] skew young and male, tend to be tech savvy and often don’t use other social networks. That makes them harder to market to thus making Reddit ads attractive to some advertisers looking to target that demographic.[8]

Advertising-based business model: As a high-traffic website, Reddit monetizes its users by selling ads to companies wishing to target its user demographics.

Freemium Business Model: Freemium companies offer the ability to use their service or platform for free then offer perks to those willing to pay for a premium membership. In Reddit’s case, Reddit Premium gives subscribers an ad-free Reddit experience and a set amount of Reddit Coins every month.

Virtual Goods Business Model: Reddit sells virtual goods they call Reddit Coins. Redditors can use them to buy awards for other Redditors. These are often used to show appreciation for a post by giving the poster the ability to use Reddit without ads.

Reddit has considerable staffing and hosting expenses in order to run such a large website. Despite making good progress at growing their revenue, it does not appear Reddit has ever made a profit. Their actual results aren’t available to the public as Reddit is a private company.

Reddit makes money in three different ways: through ads, through paid subscriptions, and by selling Reddit Coins, a kind of virtual good.

Reddit’s business model is focused on finding a variety of ways to monetize their user base. They do this either by leveraging users to generate ad dollars or by selling digital services directly to them.

The majority of Reddit’s revenue comes from ads. Advertisers can target their ads to the front page of Reddit, to specific subreddits, or show them in the sidebar. Reddit’s ad model can be based on cost-per-view, or cost-per-click. They also offer top post takeovers and autoplay videos. That means that Reddit charges advertisers based on how many people view, stream or click on an ad on a page or a flat fee for having your ad in the top spot on Reddit’s front page.

While Reddit typically has a higher percentage of its revenues coming from desktop ads than other websites, in 2020, 57% of its ad revenue came from mobile ads.

Reddit allows users to give each other Reddit Coins. They are a virtual good that Redditors can use to buy awards for other Redditors to show appreciation for a post or to give them the ability to use Reddit without ads. For example, a Platinum Award gives someone a month of r/lounge access, ad-free use of Reddit, and 700 Reddit coins. It costs 1,800 coins.[13]

Reddit has already experienced an acquisition, but the company has still been taking on investors. Indeed, Reddit has been through a number of funding rounds since it was acquired in 2006 by Conde Nast Publications and its parent company Advance Publications.

Since Reddit is still a private company, its revenue and expenses are not made public through required quarterly or annual filings. However, it was reported that the company made $100 million in ad revenue in the second quarter of 2021 for the first time. That represented a tripling of ad revenue over the same period in 2020.[18]

They have to accomplish this while still keeping their user base engaged and while continuing to improve on the user experience. That is a tall task and it’s unclear if the company will be able to pull it off. However, their recent traction in regards to ad revenue growth is a hopeful sign.

Because Reddit is not a public company, they are not required to make their financials public. However, the fact that the company has needed to raise increasing amounts of venture capital suggests it is not yet profitable. Given that Reddit has also reported increased ad revenue in the last few years, the company is likely getting closer to profitability.

Reddit has a huge audience that loves to consume content, and they’ve managed to turn that into a successful business. They have a lot of tools in place to help users generate revenue, as well as a variety of ways for advertisers to reach their audience.

So, what do we think? Reddit is an extremely valuable resource for finding content that is relevant to your interests. Not only does Reddit have a massive user base, but it also allows you to vote on and up- or down-vote posts, which can result in any post reaching the top of the page (or being hidden altogether).

What do you think about the business model and revenue streams of Reddit? Are they effective? Let us know!

That’s all for now. Thanks for reading!

How Does Notion Make Money? Business Model of Notion

How Does 9GAG Make Money? Business Model of 9GAG