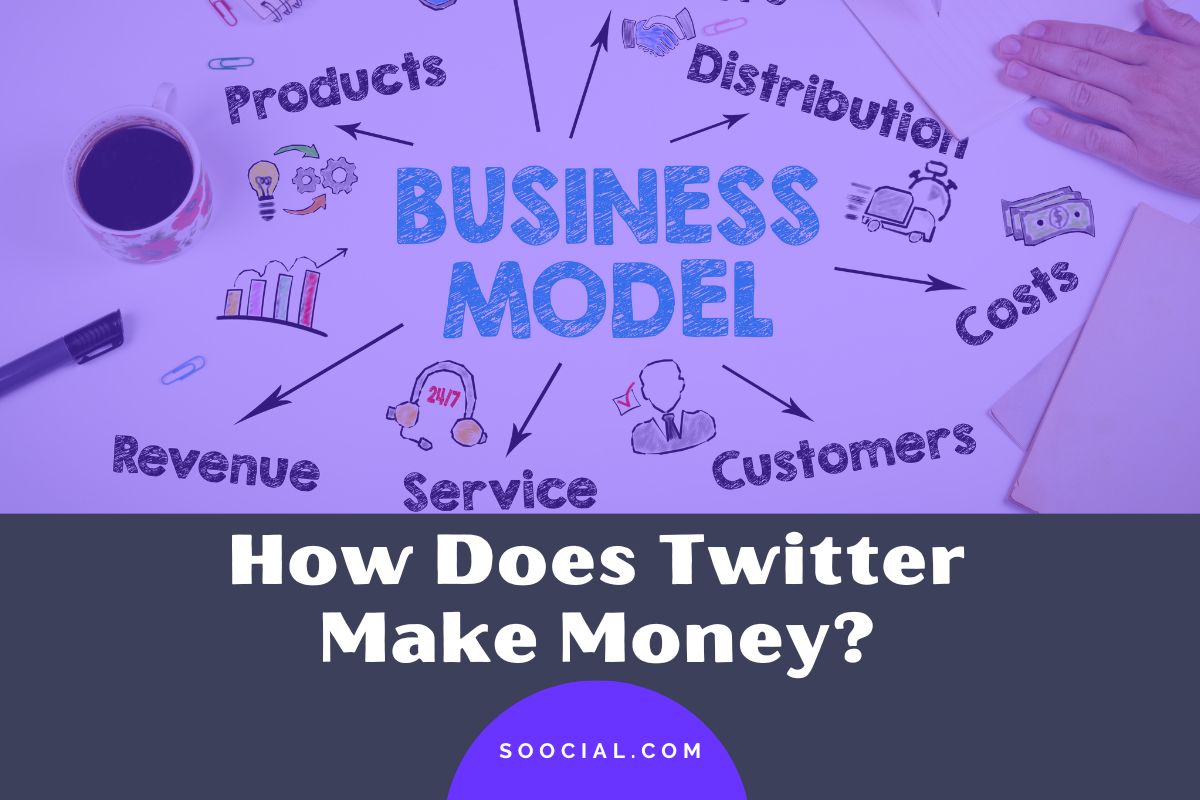 Twitter is one of the most popular social media networks. Like most social networking companies, advertising makes up the largest portion of their revenue. But Twitter has a few other creative sources of revenue. [1]

Twitter primarily makes money via advertising. Over 85% of Twitter’s revenue comes from its ad offerings. However, the company also makes money on things like data licensing and subscriptions.

Founded in 2006 by Jack Dorsey, Noah Glass, Evan Williams, and Biz Stone, Twitter is known for its 280 character messages known as tweets. The company currently trades on the New York Stock Exchange (NYSE) after going public in 2013.

In 2022, the future ownership of Twitter was in dispute. In April, Elon Musk agreed to purchase the company only to back out a few months later in July. The deal is the subject of an ongoing lawsuit were Twitter is asking a judge to compel Musk to follow through on the agreement. Meanwhile, Musk is arguing that Twitter lied about the number of bots on its platform and breached its contract with him by refusing to provide him with the information he needs to verify the company’s bot claims.[2]

Brands, celebrities, media personalities, and regular people can post messages, follow each other, and build community on the platform. People who are well-known or in certain professions can be verified by the platform, earning a checkmark beside their name. Twitter also has a live Spaces option where people or groups can create a live chat room for users to connect or discuss a topic.

Like many public social networks, Twitter offers the ability to personally message someone and the option to turn the ability to receive personal messages on or off. This can allow greater access to prominent people who would otherwise not be communicating with the public directly.

In recent years, Twitter has been playing with new features and functionalities to create more community and, as a result, more opportunities for revenue.

Twitter introduced Fleets in 2020, which was a play on Instagram ‘Stories.’[3] However, they were not used frequently enough by Twitter users or proved a challenge to monetize, so in 2021 they were discontinued.

Twitter is often criticized for the harassment many people experience on their platform, something that the company is not always quick to address.[5] For example, in 2022, other social media companies like Facebook and Reddit banned the use of the word ‘groomer’ against people in the LGBT community on their platform. Twitter eventually banned the term as well but not after advocates called them out.[6]

Twitter has also been criticized for its role in spreading disinformation during the 2020 election, the COVID-19 epidemic and the January 6th assault of the US Congress building.[7] The company famously banned Donald Trump from its platform after they were accused of letting him use their service to incite violence.[8]

As of May 2022, Twitter had 229 million monetizable daily active users on the site.[9] In 2021, that translated into over $5 billion in revenue. However, many believe that some of those daily active users could be bots, a frequent problem on the network. Others believe that Twitter is not making the most of their audience with their current monetization strategy.[10]

One of the benefits of advertising on social networks is that companies can create ads that don’t feel like ads. Instead, they have the appearance of just being content on the platform. That can lead to greater engagement and the impression of organic reach or buzz around a product or service.

There are a few other common business models for social media networks. They include things like selling data, charging for premium subscriptions to businesses or individuals, or processing payments. Twitter has included all these monetization strategies in their business model. However, none of them make up a significant percentage of the platform’s revenue.

Despite Twitter making a considerable amount in revenue, the company is often thought to be underperforming compared to other social networks. Twitter also has considerable staffing, platform, and development expenses.

Whether their 2022 results will continue Twitter’s upward trend in gross profit is yet to be seen.

Twitter makes money in more than four different ways. These include advertising, selling and licensing data, premium subscriptions, and payments to creators.

Twitter’s business model is focused on finding effective ways to monetize their daily active users in any way possible. While the company separates out their income to clearly show how much they make their advertising services, they put all their other sources of income under one heading called ‘data licensing and other’ in their annual report.

For that reason, it’s unclear exactly how much Twitter makes from any other revenue sources other than advertising.

The cost of Twitter ads varies depending on what type of ads you’re purchasing. A promoted tweet is billed by actions taken with it – like commenting, retweeting, or clicking on a link. It can cost anywhere from $0.50 to $2.00 per action.[13]

A follower ad charges companies per follower that gets added. For example, each new followers can cost $2.00 to $4.00. Trend promotions are the most expensive kind of Twitter ad. They can cost up to $200,000 per day.[14]

Twitter’s data licensing makes up another significant portion of its revenue stream. The company sells a subscription to its Twitter data to companies or developers. They data can help companies understand both real-time and historic actions and trends on the platform.

Companies can then use that data in demographic research profiles that they resell, their own internal research, to optimize their ads on Twitter and other social networks, or to create products based on Twitter users and interactions.

Twitter lists data licensing and other revenue sources as making up $571 million of its revenue in 2021. How much of that was directly from data licensing is unclear.

Twitter has a subscription program that it calls Twitter Blue. The program was launched in November 2021 and gives users several useful features like the ability to undo tweets, browse without ads, and get access to the company’s latest features.

The subscriptions were originally $2.99 per month, but in July 2022 the company raised the price to $4.99 per month.[15] They claim that more features will be offered to Blue subscribers in the future.

Twitter offers two ways to send creators on the platform payments: Super Followers and Tips. Super Followers are a way to subscribe to the tweets of someone whose content you enjoy. It costs $4.99 to Super Follow someone with $3.99 going directly to the creator. Twitter makes a minimum of $0.10 per Super Follower.[16]

Twitter (TWTR) is currently a public company trading on the New York Stock Exchange (NYSE). The company went public in 2013 with a successful IPO.[18] Its shares debuted at $26 and were at $44.90 by the end of their first day of trading. That valued the company at around $24.4 billion.

In July 2022, Twitter was trading at around $41.00 with a valuation of $31 billion. However, Elon Musk agreed to purchase the company earlier in 2022 for $54.20 per share for a total valuation of $44 billion before saying he was backing out. The matter is currently before the courts.

Twitter has made good progress in increasing its revenue and profit in recent years after a revenue plateau from 2018 to 2020 where the company saw very little revenue growth.

However, Twitter released disappointing second quarter results in 2022. The company made $1.18 billion during the period, a decrease of 1% year over year from the same quarter in 2021. In addition, during that period their operating costs were $1.52 billion, resulting in a loss of $344 million.

It is unclear whether Twitter’s revenue and profit will grow in 2022 at the same pace it did in 2021 or even if they will end the year profitable.[20]

Since its inception in 2006, Twitter has grown into one of the largest social media platforms on the internet. It currently has more than 200 million monthly active users, and it’s estimated that over 500 million tweets are sent every day.

As you can see, Twitter is a business model with many components that come together to create an incredible experience for users. It’s a platform that is constantly evolving and improving, but the core values of Twitter—those of connecting people and building community—have stayed consistent throughout its history.

Twitter is a truly unique social media platform in that it allows you to broadcast your thoughts and ideas to the world without having to worry about time commitment. Whether you are looking for an easy way to share snippets of your day with friends and family, or whether you want to use Twitter as a marketing tool to reach out to potential customers, Twitter is definitely worth investigating.

We hope you enjoyed learning about how Twitter makes money and what kind of revenue streams they have. If you want to learn more about business models and how other companies make money, check out our blog for more posts like this!

How Does Snapchat Make Money? Business Model of Snapchat