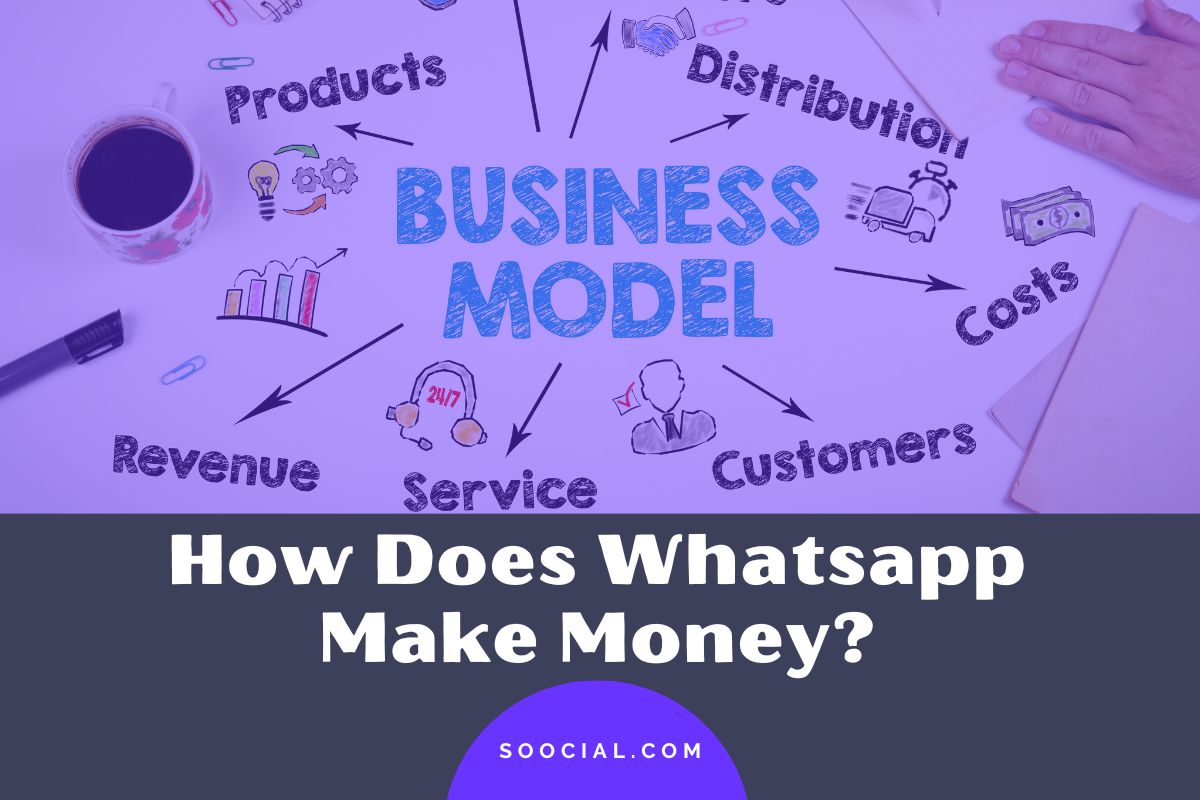 WhatsApp is a popular free messaging app. So, if the service is free, how exactly does WhatsApp make money for Facebook, it’s parent company? Turns out that the platform has two main sources of revenue.

WhatsApp makes money via an enterprise version of WhatsApp called WhatsApp Business, used by companies for sales and support, and WhatsApp Payment, a way to send money to other users that charges the receiver a fee.

Founded in 2009 by Jan Koum and Brian Acton, the messenger service promised users free domestic and international messaging over the internet. Free messaging was preferable to many cell phone users over costly or geographically limited SMS messaging.

The service quickly took off. It amassed 450 million users by the time Facebook, now Meta Platforms, bought the company in 2014 for $21.8 billion.[1]

As of April 2022, WhatsApp boasted 2.26 billion global users.[2] While many might believe that the United States is the region with the most WhatsApp users, they would be wrong. The geographic region with the highest number of WhatsApp users is India. The platform is also the most used messaging app in over 100 countries. [3]

Contents show
What is WhatsApp & How Does It Work?
Business Model of WhatsApp
How Does WhatsApp Make Money?
WhatsApp Business
WhatsApp Payment
Funding, Valuation & Revenue
Is WhatsApp Profitable?
Conclusion
Sources

What is WhatsApp & How Does It Work?

Apart from Facebook and Instagram, WhatsApp is Meta’s biggest platform. The messaging service allows users to do things like make voice and video calls, send messages to individuals or groups, send voice messages, and share media such as videos and images.

Billions of people use WhatsApp to communicate with local and global contacts in order to avoid using their cellular data or to avoid costly international calling or messaging fees. The platform has no ads and is free. WhatsApp also promises that all messages sent have end-to-end encryption.

To sign up, users input their Facebook login and either input their contacts or import them from their phone’s address book. They can then start chatting with friends one-on-one or in groups.

While WhatsApp has long been a popular messaging service, the platform did experience what many in the media called a ‘mass exodus’ in 2021. That’s when WhatsApp updated their privacy policy. Many believed the new policy didn’t protect user privacy. It also used confusing language around where encrypted messages were stored. [4]

Millions were said to have left the platform around that time and downloaded apps like Signal and Telegram because of their more robust privacy policies. [5]

WhatsApp’s product is pretty straightforward – it offers a free messaging service. But the way WhatsApp makes money is not as easy to discern. With no advertisements or user fees, just how does WhatsApp generate revenue?

Originally, WhatsApp had a freemium business model. That means that users got their first year on the app free and then were asked to renew for a small annual fee. While in-app advertising might seem to be an obvious alternative given Meta’s robust advertising business, WhatsApp chose a different route.

The platform makes money through two services: WhatsApp for Business and WhatsApp Payments.

It is believed that because of that, WeChat has a higher average revenue per user (ARPU) than WhatsApp. It’s been estimated that Whatsapp’s ARPU is just $1 whereas WeChat’s is $7.[6] WeChat, however, only has 1.24 billion users, most of which are based in China whereas WhatsApp has a larger and more geographically diverse user base.[7]

As WhatsApp business model is global, much of the revenue it generates comes from international markets. For example, the WhatsApp Business app is particularly popular in Indonesia, India, and Brazil. [8] Those are also the messaging platform’s top three markets with the United States coming in fourth.

WhatsApp has considerable personnel and hosting. Indeed, it costs a lot of money to run an app with such a high volume of daily users. While Meta does not separate and differentiate WhatsApp’s revenue from its general revenue, it has been estimated that the platform brough in $8.7 billion in 2021, up from $5.5 billion in revenue in 2020.[9]


How Does WhatsApp Make Money?

WhatsApp makes money in two different ways: through WhatsApp Business, a messaging service for enterprise, and WhatsApp Payments, a payments service that allows users to send money to others within the app.

WhatsApp’s business model is unconventional for a messaging service with so many users since they do not make money via advertisements.

Meta allows users to access WhatsApp for free since its primary monetization strategy is around business use of the app. That’s why the company created a WhatsApp Business API. It allows enterprise companies and other apps to use the platform to message customers as part of their sales and support programs.

The API, aimed at medium and large businesses, allows them to automate their WhatsApp messaging communications with things like automated replies, interactive messaging, and chatbots. It’s offered as an API instead of a standalone platform or app because it’s designed to integrate with companies’ existing tech stacks and customer service management program.

Meta also offers small businesses the use of the WhatsApp Business app free of charge. The free version has more limited features and is only built for a low volume of messages. Only one user profile can be created on the app.

The largest per country share of Meta’s revenue from WhatsApp Business comes from countries where WhatsApp is more popular. Those include Brazil, India, and Indonesia.[11] That’s not surprising. With such widespread use of the service, companies want to be able to connect with customers via WhatsApp and are willing to pay to be able to do that easily and at scale.

Companies are charged for the use of WhatsApp based on how many messages they send. The first 1,000 conversations per month are free. Rates then depend on where the company is based. They charge different rates based on your region and charge fees in different currencies.

WhatsApp Payment is one way that Meta monetizes its users directly. It’s simple to get started. Users simply add a bank account, verify their account, and then start transferring money. Users can send and receive money via WhatsApp Payment from anyone who uses UPI-based apps.

Those who send money can do so without any fees. However, those who receive funds have to pay a percentage of their payment to WhatsApp.

WhatsApp Payment is not available in all regions that WhatsApp operates. They only provide the service in India and Brazil. However, WhatsApp does have a digital wallet called Novi that allows people in the United States to send money directly in a WhatsApp chat.[13]

While WhatsApp Payment currently has a limited rollout, Meta claims to be working on bringing the feature to other countries.

WhatsApp is owned by Meta and is a profitable subsidiary. Prior to being acquired by Facebook in 2014 for $21.8 billion, WhatsApp received funding from one sole investor, the prominent venture capitalist firm Sequoia Capital.

At the time of the acquisition, the company’s two founders, Sequoia Capital, and platform’s employees shared the mix of stock and cash that Meta paid.[14]

Since its acquisition, it is unclear how much WhatsApp is worth independently of Meta and its other platforms like Facebook and Instagram. However, as of July 2022, Meta had a market capitalization of nearly $500 billion.

That represents impressive revenue growth. However, in order for investors to take advantage of WhatsApp upside potential, they would have to invest in Meta as a whole. There is no way to invest individually in WhatsApp.

WhatsApp is a part of Meta and generates a significant amount of profit for its parent company. With an estimated gross revenue of $8.7 billion in 2021, the platform is profitable. With its success in international markets, WhatsApp’s revenue is likely to continue to increase as more people use the platform for a messaging service.

That’s it! We have covered a lot of ground in this guide, from the history of WhatsApp to its business model.

WhatsApp is one of the most successful messaging apps in the world, and it’s clear that their strategy has been successful. They have managed to remain relevant in a crowded market by focusing on simplicity, reliability, and security.

WhatsApp is also continuously innovating and improving their product, which is why they were able to beat other messaging apps in the long run. Their success is proof that a great product can help a company grow even if they don’t rely on ads for monetization.

In the end, it all comes down to one thing: people. WhatsApp has grown because of its user-base, which is made up of real people who use the app to connect with their friends and family around the world. It is a simple, effective messaging app that makes life easier for both parties involved in a conversation.

As long as people continue to use WhatsApp and find value in it, they will make money—and so will Meta (Facebook).