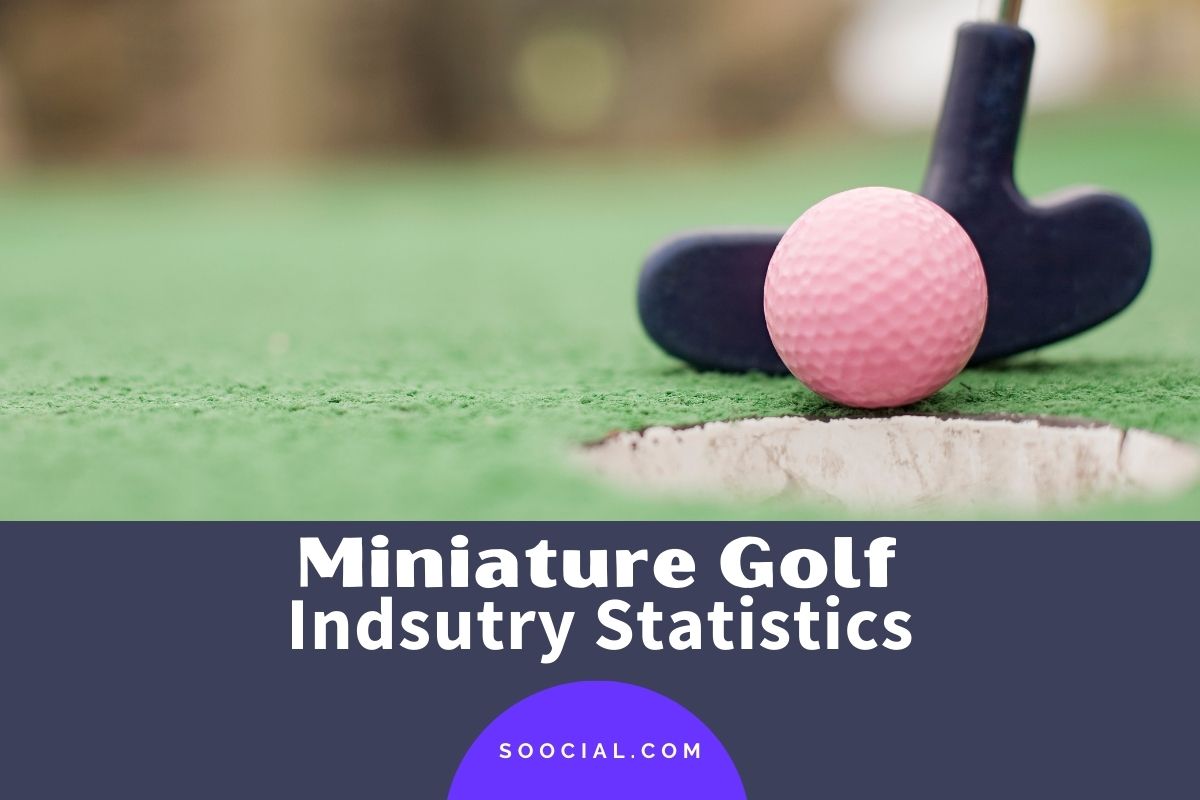 Although the origins of miniature golf are somewhat obscure, the modern incarnation of miniature golf or mini-golf, as it is often called, began in the early 1900s and took most of its features from its parent, actual golf.

Since its humble beginnings, mini-golf has developed into a global sensation today. Below we’ll be digging into some interesting miniature golf industry statistics to show how this sport has changed and grown through the years.

Miniature golf reached a peak during the 1920s but quickly lost momentum as a pastime during the years of the great depression. Below, we look at so other interesting figures relating to mini-golf, including:

Miniature golf is played globally, with popularity in the USA, Europe (particularly Germany and Sweden), and Asian countries like China and Japan. As popularity grew, competitions were held, governing bodies formed to organize, coordinate, and promote the sport.

Although the layman can grab a putter and have a great time on any mini-golf course, competition participation requires registering with the World Minigolf Sport Federation. Usually, this is done through their country-specific member associations.

There are an estimated 40,000 members globally. Europe is holding the lion’s share of members. In 2015, Germany alone had 11,000 members. Sweden had 8,000, and Austria and Switzerland had members in the low thousands, although not as well represented.

2. There are 56 member associations under the world minigolf sport federation

The World Minigolf Sport Federation is the international professional body for mini-golfers. This organization coordinates the world championship events (held biennially). Simultaneously, it supports the 56 local organizations under their umbrella.

There are 65 member countries, and they include:

These are the mini-golf courses occurring most frequently. They are constructed out of fiber cement (Eternit).

Their distinguishing feature is that they are physically smaller than the other types (i.e., shorter and narrower) while still having 18 holes selected from 28 preset designs. These courses are generally competition-approved.

Another interesting feature of these holes is that you cannot walk or stand on the course or any obstacles.

These courses were traditionally popular in Finland and Sweden but spread across Europe.

They are constructed of wooden borders and a felt (type of material) floor. Individual holes are generally longer than miniature golf (Eternit) holes.

There are 40 different hole setups to choose from in felt golf course designs. During play, standing on the course is permitted.

These courses originated in Switzerland and are still popular there. Beton courses are well represented in Austria and parts of Germany as well. Concrete golf courses migrated to the U.S. during the 1950s.

Golf courses that fall into this category are the “Adventure Golf” and “Crazy Golf” varieties. These courses are most popular in the U.S. and England, and they have artificial grass as the putting surface.

These courses were only accepted as competition standard in 2007, in a bid to increase the accessibility to mini-golf competitions and to encourage more people to play.

There is a lot of creative freedom in these courses, allowing the designer to customize each hole as desired (lanes are not restricted to a standard size and layout). The benefit of these courses is that countries that don’t have the funds to build the other types of mini-golf courses can still host tournaments on these.

These courses also generally have particular rules/playing styles. The biggest benefit of these courses is their marketing value to gain a better public buy-in to mini-golf.

Below are some stats concerning miniature golf competitions, particularly the world championships.

4. Globally there are over 1,300 miniature golf events held annually

Each member of the World Minigolf Sports Federation (WMF) hosts local tournaments on an annual/biennial basis.

The WMF hosts international championships, which include:

Mini-golf tournaments are frequently held in Europe; however, aside from Europe, only China, India, Japan, the United States, and Taiwan participate in international competitions.

In the U.S., the two big mini-golf organizers are the Professional Putters Association and the U.S. Pro Mini-Golf Association. They are responsible for the Master’s Miniature Golf open competition.

5. Vanessa Peuker is the #1 female minigolf player in the world

Pending the results of the 2022 tournaments and championships, the standing miniature golf champions from 2020 of women are as below.

As of 2020, the top ten women players of minigolf include:

6. Fredrik Persson is the top-ranked minigolf player among males

The 2020 men’s top ten minigolfers include:

7. The average winnings in a miniature golf tournament are just $5,000

The USA has some of the larger prizes for mini-golf competition winners, and that’s up to around $5,000 for the top spot. In Europe, the winnings are considerably less, and some tournaments are without prize money.

The Australian mini-golf open tournament for 2022 has a prize pot of $10,000. So, the winners won’t be getting much after the “pie” is split.

Unfortunately, mini-golf is not at the point where it could sustain you full time. Although the pastime’s popularity grows, it is still not recognized as a professional sport. Competitive players still need to hold down a day job while getting their practice in.

There are, however, plans to grow the competitive element of mini-golf. Organizers like Bob Detwiler, the founder of the U.S. Pro Minigolf Association, are pushing prize pots up to $20,000. They’re even dreaming of $100,000 pots in years to come.

As with any business (or sport), miniature golf needs to make sense financially. Below we look at how mini-golf adds to the economy, how much it costs to set up, and what the future holds for the hobby/sport.

It costs approximately $500,000 to start a miniature golf course, with a monthly expenditure of around $10 to 12,000. With these costs in mind, many course owners could make back what they invested within a couple of years (some of the quickest were in 18 months).

Miniature golf courses still have the potential to be lucrative. The mini-golf industry is an estimated $337-$450 million market in the U.S.

9. The miniature golf industry is expected to grow at a CAGR of 3.7%

Market analysts suggest that the contributing factor to this increased market growth is increased “disposable” income, money that can be spent on leisure activities, over the last few years.

Many miniature golf establishments don’t offer mini-golf as the sole activity. Due to the rise and fall in popularity mini-golf experienced over the last 100 years, companies learned to diversify.

Many establishments include arcades, carousels, go-karts, bumper cars and boats, food and beverage outlets, and a plethora of other fun activities to diversify and tap into those markets.

10. The miniature golf industry employs around 6,722 people in the United States

There are roughly 1,010 companies within the miniature golf industry, and they employ 6,722 employees.

Of these companies, the most prominent is Putt-Putt LLS and Monster Mini Golf. However, there are many small business mini-golf courses that people establish as a leisure activity and not for tournament purposes. These mini-golf courses add to the market/industry.

11. Families with children contribute around 36% of miniature golf demographics

It’s no surprise that the biggest miniature golf lovers are families with children.

Before a new mini-golf course is erected, a market survey is usually conducted to determine the most likely participants. During one such survey, the analysts determined that around 36.9% of those frequenting the mini-golf course are families with children aged between 5 and 18 years.

However, mini-golf is not limited to this. Teenagers and young adults also use the facilities of their own accord. Another demographic which uses mini-golf courses is corporates for team building and meetings.

Although the miniature golf industry saw a market growth over the last five years, the effects of the Covid-19 pandemic were still felt by small businesses and larger ones alike.

Many businesses suffered from restrictions on gatherings, people’s movements, and the selling and consumption of various products, like food. In 2020, matters were worsened by the confusion created. Some states opened up their mini-golf courses, while others remained closed.

Some covid curbing initiatives include:

Miniature golf is a varied pastime, with many people participating in it. Below we look at some random stats about the game of mini-golf.

13. The best achievement in miniature golf is 18 holes in 18 strokes

Also known as a perfect round in mini-golf. Over one thousand individuals (globally) have achieved this record while playing on Eternit surfaces during competitions. But fewer in the USA. Eternit surfaces are surfaces made of concrete mixed traditionally with asbestos but in recent years other materials.

Competitions held on felt, concrete, or open courses have not produced official “perfect rounds.” However, there are claims from Sweden of perfect rounds during unofficial games.

14. The Hawaiian rumble is reputed to be the most challenging miniature golf course

When it comes to bragging rights, South Carolina’s Hawaiian Rumble mini-golf course has plenty of reasons to “flex.” Based on the appearance of a true golf course, the Hawaiian Rumble features sand traps and bumps instead of fiberglass obstacles. Many pros agree that hole 16 is the most challenging.

Although not the only challenging mini-golf course, the Hawaiian Rumble hosts the annual Master’s (the apostrophe is important) Miniature Golf tournament. This competition lasts for three days and consists of twelve rounds.

According to Popular Mechanics, some additionally challenging mini-golf courses include:

15. A round of miniature golf lasts for between 30 minutes and 2 hours

How long is a piece of string? The duration of a game of 18 holes depends on many factors, including:

If you’re in a focused game with few other people involved, completing a course in 30 minutes shouldn’t be a problem. But, families with small children/big groups could take up to 2 hours to complete a course.

16. There are around 5000 miniature golf courses in the US today

Mini-golf is just as popular in Europe. Germany alone has around 4000 courses.

17. Myrtle beach in South Carolina has the most miniature golf courses

The state’s very own Myrtle Beach is often dubbed the “mini-golf world capital,” and for a good reason too. This South Carolinian town boasts more than 50 miniature golf courses.

The total construction expenses of some courses in Myrtle Beach are estimated to stand in the millions of dollars. Most courses are adventure golf courses and are not competition-focused.

Some of the most popular Myrtle Beach courses include:

We hope you enjoyed this deep dive into the fascinating world of miniature golf.

As you can see, it’s a sport with a long, storied history, and one with many fans throughout the world. If you’re feeling particularly inspired by these stats, maybe this is the year you decide to build your own custom mini golf course! We think that would be absolutely amazing.

How do you feel about the state of miniature golf? Is it in decline? Are you a big fan? Will you be taking your kids to play sometime soon? If you have an opinion on miniature golf, we’d love to hear it! Send us an email or tweet us with your thoughts.

Thanks so much for reading. Can’t wait to see you on the green!