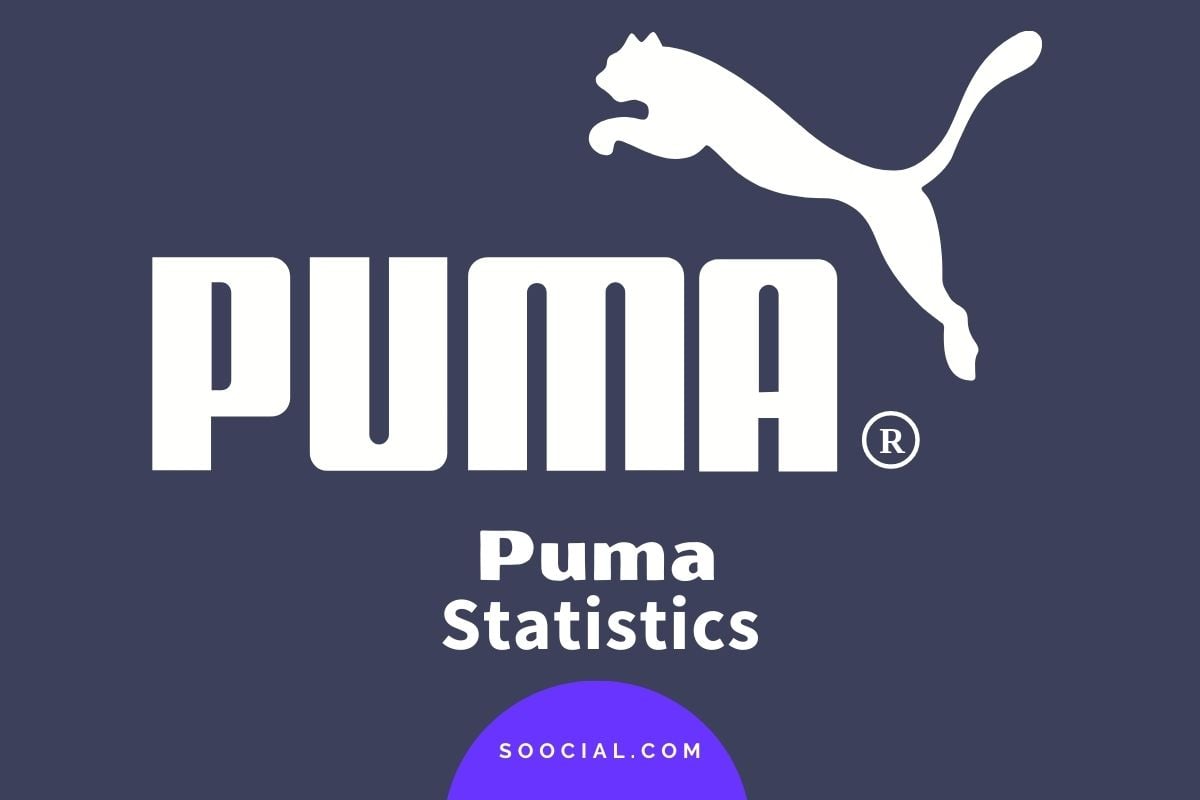 Ever wonder how Puma became so successful? Or how they’ve managed to stay in the running for so long? Well, we did! And we thought you might want to know too.

We’re so excited to share with you some of the most interesting and inspiring Puma statistics we’ve come across. From the history of Puma, to the top regions for Puma sales, to some of their most famous products and partnerships, this list is sure to be a great resource!

Puma is a global sportswear brand that was founded in 1948 by Rudolf Dassler, who split the company with his brother after World War II. The name “Puma” comes from the South American animal jaguar. The company has a reputation for being an innovator in the field of design and technology, and their products have been worn by many famous athletes including David Beckham, Usain Bolt, Michael Jordan, Boris Becker, and Serena Williams.

What makes Puma so unique? What are some of their best-selling products? How do they differ from other athletic brands like Nike or Adidas? These are just some of the questions we’ll be answering today.

Here are the latest Puma statistics that will blow your mind—and maybe even help your business become as successful as they are.

Contents show
Key Puma Statistics (Editor’s Picks)
General Puma Statistics
1. Puma has 832 stores worldwide.
2. Puma employs roughly 16,125 around the world.
3. Puma invests over 50 million euros into research and development every year.
4. Asia is Puma’s strongest sourcing option, where 94% of its suppliers are located.
5. Puma spent 1.31 billion euros on marketing in 2021.
Puma Income and Sales Statistics
6. Puma recorded a global revenue of 6.81 billion euros in 2021, making it the third-largest sportswear brand worldwide.
7. In 2021, Puma’s total sales increased by 30% compared to the previous year.
8. Puma’s net income in 2021 was 123.6 million euros.
9. In 2013, Puma recorded its lowest net income between 2006 and 2021, with only 5.3 million euros in net income that year.
10. Puma Group’s global gross profit reached 3.26 billion euros in 2021.
11. In the first three quarters of 2021, Puma’s wholesale business increased by 42%.
Puma Sales Statistics By Region
12. In 2021, around 75% of Puma’s combined sales came from Europe and the Americas.
13. In 2021, 24.1% of Puma’s sales came from the Asia/Pacific region.
14. Puma had a total net sales of 2.6 billion euros in the Americas in 2021.
Puma Sales Statistics By Product Segment
15. Puma made 2.52 billion euros in clothing sales in 2021.
16. Apparel sales made up 37% of Puma’s total sales in 2021.
17. In 2021, footwear was the largest contributor to sales among all of Puma’s product segments.
18. Puma’s total footwear sales worldwide reached 3.16 billion euros in 2021.
19. Accessories sales consisted of 16.5% of Puma’s total sales in 2021.
Related Questions (FAQ)
Who is Puma’s target audience?
Which is more successful: Puma or Adidas?
Which brand is better: Nike or Puma?
What region is Puma most popular in?
What does Puma do differently?
Conclusion
Sources

In 2019, the German brand opened 86 new stores, with the New York flagship store being the highlight of the year. Despite the e-commerce boom, Puma still focuses on traditional retail and is succeeding at it.

Employment figures recorded on December 31, 2021 showed that Puma has 16,125 employees worldwide. The brand’s number of employees grew from 11,495 in 2016. This growth is primarily a result of the company’s retail stores and factory outlets expansion.

Puma is extremely proud of its gender diversity. The percentage of women in their ranks has been steadily increasing, and in 2021, the ratio of men to women on their staff was 51:49.

Puma has been making strides in the area of gender equality, and they’re not slowing down. Puma keeps track of how many women hold senior leadership positions within the company: in 2021, 44% were women. That’s another area where they’ve made significant progress since 2013 (when it was only 34%).

3. Puma invests over 50 million euros into research and development every year.

This comes as a result of the brand’s effort to be ahead of its competitors. Since the beginning, Puma has been focused on creating reliable and appropriate footwear for every sport and activity out there. They’ve created specialized footwear for ice skating, bowling, wrestling, and roller skating, among others.

4. Asia is Puma’s strongest sourcing option, where 94% of its suppliers are located.

Six of the most important countries where Puma sources its materials are all located in Asia. This includes India, Indonesia, Bangladesh, Cambodia, China, and Vietnam.

Aside from being a vital sourcing supplier, Asia is becoming a key market that helps increase Puma’s sales. Sales in the Asia/Pacific region increased by 321 million euros from 2018 to 2019, signifying a 26.6% increase in the region’s sales share.

Puma’s marketing budget has been increasing over the years, and it once again showed an increase from 2020’s budget of 1.05 billion euros.

Puma is known for working with A-list celebrities and athletes, such as Rihanna, Kylie Jenner, Selena Gomez, Jay-Z, Lexi Thompson, and DeMarcus Cousins.

Fortunately, the fruits of their marketing efforts are evident in their ever-increasing sales figures.

6. Puma recorded a global revenue of 6.81 billion euros in 2021, making it the third-largest sportswear brand worldwide.

Nike and Adidas surpassed Puma when it came to global revenue in 2021. Nike made 36.53 billion euros that year, while Adidas made 21.23 billion euros. These three sportswear brands have remained in the top three spots worldwide for many years, and their rankings haven’t changed since.

Puma’s sales figures in 2021 were indeed record-breaking. The strong sales growth is attributed to a positive development in its sector, where more and more people are becoming aware of the importance of exercise and physical activity. It’s also a result of the brand’s continuous momentum and increasing demand for its product globally.

Compared to Adidas, however, the brand’s net income seems little. Adidas recorded a net income of 674 million euros in 2020 and 1.8 billion euros the following year.

On the other hand, the highest net income during that same period was recorded in 2007, when Puma made $269 million euros in net income. The German sports apparel brand had decreased sales in Asia and Europe in 2013’s first quarter. Profits in the first quarter dropped by 32%.

The Puma Group consists of Puma, stichd, and Cobra Golf. The firm made around 3.26 billion euros in 2021, recording an increase of 800 million euros from 2020. Since 2014, Puma’s gross profit has been increasing steadily, and for the first time, it hit the 3-billion mark in 2021.

Puma may have had a higher gross profit margin in 2021 because it got better at sourcing key materials for its products, including cotton, leather, and polyester.

During this period, Puma’s wholesale segment recorded a sales figure of 3.87 million euros, which was 42% higher compared to the first three quarters of 2020.

The brand’s wholesale business segment yields higher sales than its direct-to-consumer business, which earned 1.17 million euros in the first nine months of 2021.

These regions are where Puma had the most profits in 2021. Particularly, 38.7% of Puma’s sales that year came from the Americas.

Since its inception, Puma has been on a mission to incorporate more creativity and uniqueness into its designs. They have collaborated with renowned fashion designers, including Alexander McQueen and Sergio Rossi, to make this happen.

Asia and the Americas largely contributed to Puma’s growth in the first few months of 2021 despite a challenging market in China and COVID-19 restrictions in place. That said, the continent is not only the main contributor of the key materials of Puma’s products.

In 2020, clothing sales reached 543.2 million euros. There has been a massive increase in the sales of Puma apparel from 2020 to 2021, which is the highest year-over-year increase in this section over the last couple of years.

Of the 6.81 billion euros in total sales that Puma generated worldwide from apparel, accessories, and footwear, 37% came from its clothing line. Compared to the 1993 figure when Puma made 59.8 million euros in clothing sales, it’s really clear to see that the brand succeeded in growing this segment.

17. In 2021, footwear was the largest contributor to sales among all of Puma’s product segments.

That year, footwear sales accounted for 46.5% of the total sales of Puma, marking the largest share among the company’s three product segments—apparel, footwear, and accessories.

The brand faced challenges in 2021 due to ever-dynamic consumer demand, but Puma has been able to market its products effectively to the younger population by collaborating with known celebrities and fashion icons, such as Selena Gomez.

Who is Puma’s target audience?

Puma targets the young, hip, and urban population, who are mostly influenced by celebrities. That’s why Puma employs A-list celebrities like Rihanna and Jay Z to endorse their products and keep the brand on top of their target audience’s minds.

Which is more successful: Puma or Adidas?

Both companies are from Germany and were once one company built by the Dassler brothers in the 1920s called Gebrüder Dassler Schuhfabrik. Nowadays, Adidas beats Puma in net income, with the former making 1,850 million euros and the latter making only 123.6 million euros in 2021.

Which brand is better: Nike or Puma?

Both brands have their own strengths, so it’s hard to give a definitive answer to this question. For example, Puma wins when it comes to affordability, but Nike earns the point for versatility. Nike also has a better track record and higher focus on innovation.

What region is Puma most popular in?

Puma divides its sales into three regions: the Americans, EMEA, and Asia/Pacific. Of the three, the Americas showed the highest share of sales in 2021, making up 38.7% of the company’s total sales that year. This translates to 2,636.9 million euros in net sales.

What does Puma do differently?

The Dassler brothers believed in the mantra: “Our strength lies in specialization.” However, they didn’t just specialize in a few sports. On the contrary, since 1948, Puma has made shoes for almost every sport—from ice skating and bowling to roller skating and wrestling. This is what made them unique.

Time to wrap up!

We hope you enjoyed this roundup of Puma statistics. Puma has been around since 1948, when they were founded by Rudolf Dassler in Herzogenaurach, Germany. Since then, they have become one of the largest sportswear companies in the world.

We know that there’s a lot of information out there, and we’re constantly looking for new ways to help you keep up with what’s going on in the world.

279 Sneaker Store Names to Get Your Feet in the Door