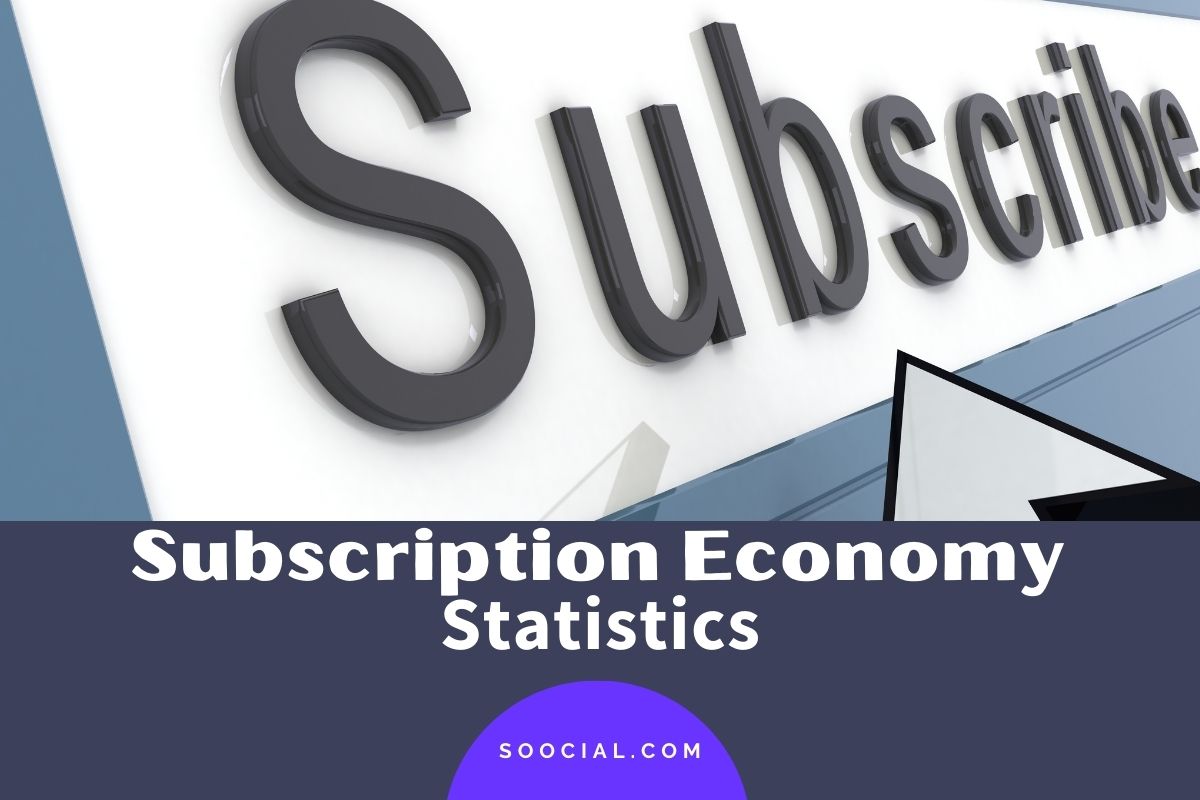 The world changed in 2007 when the first subscription services began.

In the past 15 years, subscription services have completed changed the way that many companies do business.

Virtually everyone seems to have at least one subscription service today, whether it’s in the form of a television streaming service such as Hulu, Netflix, or Amazon Prime, a clothing service, beauty products, and so much more.

We’ve gathered up all of the facts about the subscription economy, and we’ve put them together for you below.

Keep reading to learn all about the subscription economy!

The Future of the Subscription Economy

For as much as the subscription economy has grown in the past 15 years, it’s only going to get bigger in the future.

As the world focuses on being less wasteful and on creating products that can be reused again and again to reduce the amount of trash and pollution in the world, subscription services will grow even more popular.

There are already subscription services that utilize reusable packaging for laundry, food delivery, and beauty products, to name a few.

What are some of the subscriptions that you currently have or are planning to get in the future?

In 2022, the subscription economy market is projected to reach $275 billion, and that number will exponentially increase every year after.

Analysts believe that by 2025, there will be so many subscription services available that the market will reach $1.5 trillion.

With so many subscription choices, it will soon be a thing of the past to purchase one-time objects or items that you plan to quickly throw away.

Virtually every market is moving to a subscription-based sales model. When you look at how much these services are earning, it’s easy to see why.

The subscription economy started with a bang in 2007 with the creation of the world’s first streaming service, Netflix.

What originally started as a simple video rental service with the goal of rivaling the giants of the industry, like Blockbuster, twisted into something far more exciting.

Netflix remains the largest streaming service in the United States, with a 27% market share.

It is unlikely that Netflix will retain this title in the coming years, however as its market share dropped by 31% since the creation of other giants such as Disney+ and HBO Max.

3. 75% of adults believe that more people will begin subscribing to more services in the future as opposed to owning things.

Across the world, the golden glow of consumerism is fading. With each generation, our society seems to fixate less and less on physical possessions.

Instead, there has been a growing awareness of the piles of waste sitting in our landfills, and of the effect that our actions are having on the planet.

This is causing consumers to focus more on reusable, sustainable products, and subscription services are neatly filling the niche.

Thanks to this mentality, manufacturing services are undergoing a metamorphosis as they learn to stop overproducing the things that we don’t need.

While the United States remains the largest consumer of subscription goods, the practice is quickly catching on across Europe, China, and the rest of the world.

As the world becomes more focused on recycling and climate change, it is expected that more people will begin to use subscription services.

4. 78% of international adults have subscription services.

This number has grown from 71% in 2018, and it is likely to continue growing in the next decade as more businesses shift to subscription models.

Of these users, 72% would prefer the option to pay only for the specific aspects of the service that they use, or for the time that they use it rather than a flat monthly or yearly fee.

The most significant reasons that consumers cite for preferring subscription services are convenience (42%), cost savings (35%), and variety (35%).

Every year, an increasing number of people are quitting their cable subscriptions.

Additionally, as more people are growing up and moving out, less are choosing to subscribe in the first place.

Per age group, the 18-34 age group had the highest percentage of people without a TV subscription at 74%.

The second highest was the 35-54 age group at 64%. Even those over 55+ were disconnecting from their cable services as 56% had unsubscribed.

6. 69% of houses subscribe to 1 or more video streaming subscription services.

A recent study by Deloitte showed that the majority of these households have an average of 3 streaming subscription services.

With the fierce competition that is happening between streaming services, it’s no wonder that many families choose to have more than one service.

Many people only watch a few shows or movies per service, but they are still stuck paying the monthly bill regardless of how much or little they use it.

Surprisingly, nearly 43% of consumers maintain a cable television subscription while additionally paying for one or more streaming service.

In the past year, music streaming services saw a rise in business of 58%. Of these, Spotify remains the most popular, even among recent controversy.

Today, it also has 209 million free users, while Pandora is a distant second at 55 million.

Who Uses Subscriptions and Why

Among consumers, the younger generations are significantly more likely to use subscription services than older ones.

America leads the world in the number of subscription services and in digital streaming services that are purchased annually.

Other countries, particularly those in Europe and Asia are quickly developing a preference for subscription businesses as well though.

8. The US makes up 53% of digital subscriptions.

It’s no secret that Americans enjoy watching television. Virtually every house in America has at least one television in it.

When you add gaming subscriptions into the mix, the number comes to an average of 9 subscriptions per household in the United States.

It may come as a surprise that men, on average, tend to subscription to more subscription services at a time than women.

Additionally, nearly 20% of men subscribe to 6 or more ecommerce services.

Although men use more services on average than women, it is worth noting that more women have at least one subscription than men at 60% of women.

10. 62 percent of customers subscribe to a subscription because they believe it delivers good value.

A large number of people (62%) like to subscribe to a business for the value it offers. According to a recent survey by, good value for price is the most important reason for subscription sign up, followed by high quality and variety of experience.

Amazon Prime is a good example: there are some who would argue its success is due to its convenience, but it’s also consistently good value.

11. Subscribers cancel their e-commerce subscriptions nearly 40 percent of the time.

Mobile apps, particularly news and shopping apps, make up a significant portion of the subscription economy.

12. Mobile app subscriptions make up $270 billion of the market share.

There are a countless number of mobile apps, games, and services that we use on a daily basis.

Whether you’re playing a simple matching game to pass the time in the doctor’s office or you’re catching up on the news on a news app, chances are that you’re paying a subscription.

Most apps today have a limit to the amount of time that you can use them for free, usually just long enough for you to get hooked.

Eventually, you’ll hit a paywall that will stop you from using the app any further until sign up for a subscription or make an in-app purchase.

Most of us don’t notice the $1.99 one-time purchase or the $3.99 a month subscription, but it adds up to some massive revenue when enough people buy it!

13. 53% of all software revenue is subscription model based.

There is an increasing demand for cloud-based services in both the consumer and business sectors.

Although it is not feasible for every type of software to become cloud-based, the vast majority of services will be making the transition.

Many of these companies will not only make the change for their own internal servers and business uses, but they will also create more cloud-based offerings for their products.

14. Car subscription services have grown by 71%.

Have you always wanted the thrill and prestige of driving a luxury car but couldn’t justify the cost of the car or of the insurance required to drive it?

Then you’re in luck! Currently, Audi, Lexus, Porsche, and Volvo have revolutionized the way that people drive luxury cars.

For a monthly subscription fee, these companies provide an all-inclusive “white-glove” service to those who can afford it.

Although it’s a bit ironic, the business of managing and selling subscriptions is its own cash cow.

Businesses such as Stripe, Zuora, and Charge Bee make up the vast majority of the competition in this sector.

The Business of Subscription Services

Subscription services are quickly becoming the way of the future.

As their popularity increases, more and more businesses will begin pivoting their business models to take advantage of the recurring revenue.

In less than a decade, the subscription economy has experienced 6x growth.

With these kinds of numbers, it is easy to see how the subscription model is becoming the way of the future.

This rapid growth is due largely to the effect that the pandemic has had on the world.

In the past two years there has been a significant shift to digital media as lockdowns, mandates, and safety measures have massively impacted the way that we go about daily life.

17. 64% of consumers say that they feel more connected to companies that they have a subscription with vs one off purchases.

Consumers are moving away purchasing physical products in favor of digital media and borrowing items that they need.

As they do so, they are increasingly becoming more aware of the companies that they are buying from.

This is leading to a significant shift in culture as companies are now actively trying to form relationships with their consumers.

It is essentially a new method of creating brand loyalty, and it seems to be working as more consumers would prefer to have a monthly subscription than just buying items piecemeal.

18.  28% of subscribers state a personalized experience is essential to continuing to subscribe

A business that makes an effort to personalize their users’ experiences will always be more successful than their competitors with today’s younger generations.

This can be as simple as adding a survey after their shopping experience or personalized customer support.

We’ve looked at so many subscription economy statistics that it’s time to wrap up!

The subscription economy is growing at a staggering rate, and it’s not slowing down anytime soon.

And while you might be thinking that this is all just another fad—like the Fidget Spinner, or whatever that was—we can promise you one thing:

This isn’t going away anytime soon.

And if you want to succeed in the subscription economy, you need to do one thing above all else: LISTEN TO YOUR CUSTOMERS.

Thanks for reading—we hope you got a lot out of this! We’ll be back with our next deep dive soon.

If you’ve got a favorite stat, tweet it to us at @soocial using the hashtag #SubscriptionEconomyStatistics. We’re sure other readers would love to read what you have to say!

If there are any stats we missed, let us know. We’d love to read your thoughts and include them in this article so everyone can check them out!

17 Customer Acquisition Statistics You Need to Know in 2022

16 Open Source Adoption Statistics to Get You Thinking