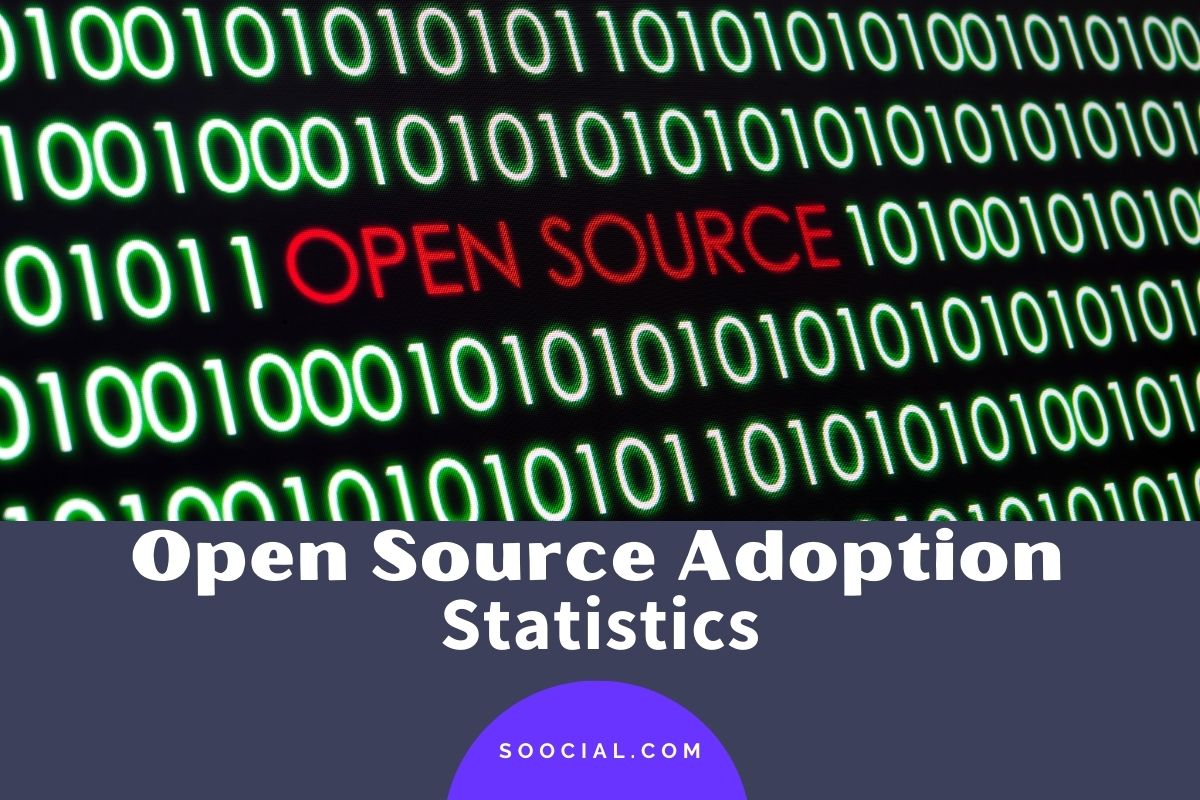 Crucial to the future of the decentralized web, the metaverse, and web3, open source adoption has been on the rise in recent years. With open source software, companies can make modifications to a range of code-based technologies and ecosystems.

According to experts, the market for open-source is set to grow at a rate of around 18.2% in the next 5 years. Currently, the market valuation for open source services is set to rise from $21.7 billion in 2021, to $50 billion by 2026. Companies are racing to the open source market in search of flexibility, agility, and new opportunities for digital transformation.

1. 90% of IT leaders are using enterprise open source

The study, which collected answers from 1,250 IT leaders, also found that 64% of companies are using open source solutions for IT infrastructure modernization, while 54% of companies say they’re using the technology for application development. 53% of respondents cited “digital transformation” as their reason for open source adoption.

2. 63% of organizations with open source program offices say those programs are business-critical

A survey conducted by the Linux Foundation, the New Stack, and the TODO group found 63% of companies consider open source program offices to be very or extremely critical to the success of their product and engineering teams.

This figure increased from 54$ in 2020, indicating growing awareness of open source program offices among participants for the survey. Around 51% of respondents also said that an increase in financial support for open source initiatives in their company is either somewhat or very likely.

3. 97% of businesses in the UK are using open-source software

According to research into open-source adoption in the UK by Non-Profit Open UK, around 97% of businesses in the country are currently using some form of open source software, operating system, or programming language.

The report looked at responses from 273 businesses in the UK, and was sponsored by the code-sharing site, GitHub. This report followed an initial stage of research which found open source technology contributed around £43 billion ($60.22 billion) in value to the UK economy.

On average, it’s estimated around 126,000 developers work on, develop, create, and maintain open source technology throughout the country.

50% of the hiring managers in the Linux report said they are increasing their hiring of open source staff this year. However, approximately 92% of the people in the survey also said they were struggling to find professionals with the correct open source talent.

Security benefits were an important consideration for 60% of the companies in the Red Hat review. While 30% of IT leaders said they believed open source solutions gave them better security overall, another 30% said they allowed them to safely leverage other technology.

6. Over the last 30 years, around 200 companies were founded with open source

A huge evaluation of the open source marketplace conducted over a period of 30 years revealed increased investment in companies with open source technology at their core. According to this Future report, the last ten years have been a crucial time for open source.

Over the last 30 years, around 200 companies emerged with open source as the core technology. Collectively, those organizations raised around $20 billion in capital. The report further shows in the last ten years, the deals have become much bigger.

Around 3 quarters of the companies and 80% of the capital raised for open-source solutions occurred during the years after 2005.

7. 65% of users are contributing back to open source technology

While Non-Profit Open UK found around 97% of companies are using open source software, only 65% are contributing back to the ecosystem in any way.

Companies from specific industries, like technology, media, and telecommunications were more likely to contribute to the open source landscape. Around 49% of respondents reported they were actively working on developing open source software, while 48% said they had open-sourced their own software.

In the report, Non-Profit UK also revealed smaller companies were more likely to share or “open source” their software than larger enterprises.

48% of the respondents in the survey also reported that using open-source technology increases app development and improves efficiency. Interestingly, organizations with more than 1,000 employees were far more likely to cite “efficiency” as a reason for using open source technology.

Other benefits of open-source solutions mentioned in the study included:

9. 58% of hiring managers are increasing open source training for employees

The Open Source Jobs report for 2021 from EdX and Linus found that around 58% of hiring managers are working on increasing training in open source technology for employees in a skills short market. According to 92% of managers, employees are also actively requesting more training.

Around 88% of hiring managers say they will be willing to pay for certifications on the behalf of their employees in open source technology, to help accelerate adoption.

10. Minimal support is the main barrier to open source adoption

While the majority of enterprise IT leaders in the Red Hat Open Source report said they were now investing in open source technology, barriers still remain. According to Red Hat, the concerns for most companies have remained similar since they first began running their survey.

The GitHub 2021 State of the Octoverse report offers some insights into open source adoption among larger companies. While many enterprise brands don’t publicize their internal infrastructure strategies, GitHub found 72% of Fortune 50 companies were using GitHub Enterprise between 2019 and 2020.

According to GitHub VP Mario Rodriquez, 2020 opened up a new set of talent opportunities in software development, and digital transformation began to accelerate.

12. Programming languages are the most commonly used types of open source software

Non-Profit Open UK’s 2021 report on open source software revealed the most commonly used forms of open-source software were programming languages, at 86%. Miscellaneous software tools came in second in the list at 84%, and public code repositories was third at 80%.

Approximately 80% of respondents said they’re currently using operating systems in an open source environment, and 78% said they were using open source databases. The least popular solutions in the report were open-source security tools, and solutions for business observability.

13. Container usage is an increasing factor of open source adoption

Kubernetes is also overwhelmingly seen as an important solution for cloud-native application development. 66% of respondents view the technology as “very important”.

14. 2 in 5 companies give higher raises to professionals with open source skills

The Open Source Market evaluation conducted by Markets and Markets in 2021 found the global industry is expected to grow at a CAGR of 18.2% up to the year of 2026. The report revealed open source solutions were accelerating from a value of $21.7 billion in 2021 to a potential $50 billion in 2026.

16. 82% of IT leaders say open source technology is used by the most innovative companies

Red Hat’s study into Open Source Enterprise adoption found that perception of enterprise open source solutions has evolved in the last decade. Companies have started to associate open source offerings less with lower bills and more with flexibility and innovation.

82% of IT leaders agreed with the statement that open source software is used by the most innovative enterprise customers. 81% of respondents also said that the technology provides companies with the flexibility they need to customize solutions according to company needs.

79% of the respondents in the study said that in the next 2 years, their organization will increase the use of enterprise open source software to access emerging technologies. The most prevalent emerging tech areas crucial for open source adoption include edge computing/IoT, where open source technology is expected to increase to 55% to 72% of cases.

For AI and machine learning, enterprise open source software use will increase from 48% to 65%.

The open source community is not only getting bigger every year, it’s also becoming more robust, with many new resources and tools available. In summary, open source is getting more popular all the time and it’s going to change the way the world works.

Have you seen some insights that surprised you? Which of these stats did you find most interesting?

Even if you don’t work with open source technology yourself, you can see how it affects your business. If you’re already in the open source community, then I hope these stats will encourage you on your path!

Thanks for joining us on this journey through the world of open source adoption statistics—we hope you found it at least somewhat interesting, and maybe even learned something new! This was a deep dive into some pretty niche stats, so you’re now an expert (in my opinion).

Let me know if you have any questions or thoughts about these numbers—I’d be happy to share more of what I know about them. Either way, thanks again for your interest in these statistics!

How Does Gitlab Make Money? Business Model of Gitlab

30 Coding Bootcamp Statistics To Know Before You Enroll