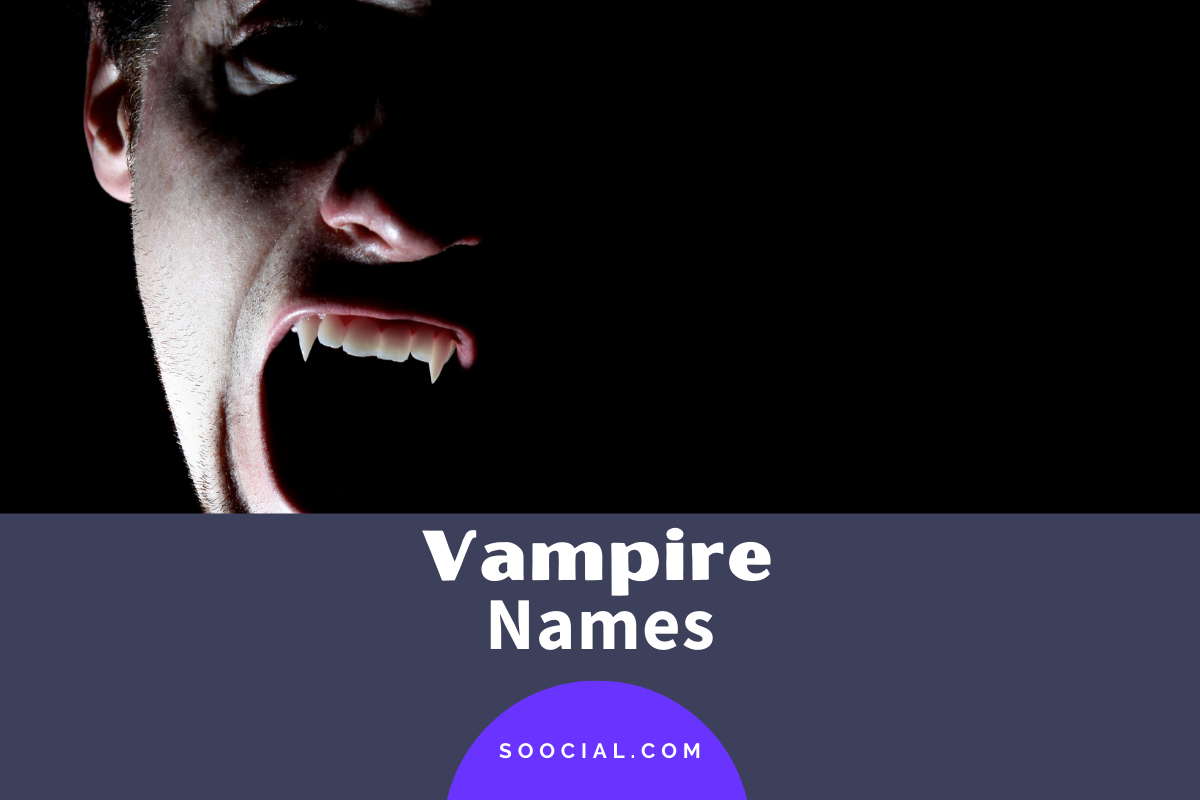 Do you know what’s a great way to really spice up your story? Vampires. They’re mysterious, they’re sexy, they can be diabolical or just misunderstood—but either way, they’re just plain cool. The world is full of vampire stories, but it’s not always easy to find a name for your new vampire character. Whether you’re writing a story or just need a good name for your next video game character, the list of Vampire names we’ve compiled in this article is sure to give you some great ideas.

Vampires have been around since their mythological origins in ancient times. From then on, they’ve had a huge influence on popular culture. It has been around for centuries and will continue to be here long after we’re gone.

Vampires don’t always sleep in coffins (although we can’t say for sure where they all choose to lay their heads down), but the one thing they all have in common is that they love blood. Vampires will do anything to quench their thirst, so they might be a little selfish when it comes to protecting their own best interests.

One of the biggest challenges in writing fantasy is coming up with interesting character names. Names are important in building a sense of identity, culture, and history for your characters. Having done a lot of research into Vampire mythology, we found that there were many great names that you can use as inspiration.

Therefore, we’ve put together a huge collection of cool, famous, badass names for vampires, so we’re sure you’ll find something that works for your undead character.

Without any further ado, let’s begin!

Vampires have long been one of the most iconic supernatural creatures in literature, movies, and TV shows. Their red eyes, pale skin, and sharp fangs are instantly recognizable.

Looking for a name for your new vampire character? Want to add a little extra oomph to your existing character? Just want to know what you’d be called if you were a vampire? Well, look no further!

Here are some of the coolest names for vampires that we’ve come across. Some sound like real names, others sound like spooky pseudonyms. And some are just really cool-sounding. Whatever it is you’re looking for in a name, we hope you find it here!

The world of vampires is actually full of strong, smart, beautiful female creatures who will literally suck your blood (in the best way possible). So what do these female vamps go by? Names like Renesmee and Asami are popular with the modern lady vampire, but the classics—like Akasha, Carmilla, or Selene—are still as powerful as ever.

Before you pick your favorite name for your lady vamp character, take a look at our pick of Female Vampire names below to get your creative juices flowing. We hope you’ll find these names inspiring!

Maybe you’re a writer. Maybe you’re a roleplayer. Maybe you’re someone who’s just obsessed with vampires and all their accouterments. We don’t know your backstory (yet). But we do know that you need some names for male vampires, and that’s where we come in.

Who doesn’t love vampires? They’re so mysterious and brooding, with their black capes and pale skin. From Twilight to True Blood, these undead creatures have captured our imaginations. When you need to name a vampire, you probably want something that will really command attention and respect (or at least a little fear!).

If you’re struggling to think of the perfect name for your bloodthirsty male vampire, allow us to be of service. We’ve compiled a list of male vampire names, so we’re sure you’ll find one that’s the perfect fit for your fanged friend!

We’ve been obsessed with vampires for as long as we can remember—seriously! From our earliest years, when we were sneaking into the forbidden section of our school library to get a closer look at Bram Stoker’s Dracula (for the millionth time), we’ve had an unquenchable thirst for all things vampiric.

When it comes to thinking of famous vampires, there are a few that stand out above the rest. From famous literary vampires to pop culture-inspired vampires and everything in between, here are some of the most famous vampire names throughout history.

We all know vampires can be a little, well, bitey. They’re often the villains of the show and are known for their evil ways. But what if we told you your favorite vampire could actually be kind of funny? Yes, it’s no longer just blood-sucking creatures of the night. These days, your favorite vampire can be funny, silly, or even stupid.

With that in mind, we’ve compiled a list of the funniest and most ridiculous names for vampires that we could think of. These names are perfect for role-playing games like Dungeons and Dragons, or just for fun if you like giving characters funny names.

Vampires are alluring, mysterious, and super cool. Whether you’re a fan of Twilight or True Blood, or maybe you’ve just binged the entire season of The Vampire Diaries (no shame), we’re sure you’ve fantasized about what it would be like to be one of those immortal creatures of the night.

We know how tough it can be to figure out the perfect name for your cute vampire. Therefore, we did some brainstorming to compile a list of cute vampire name ideas, and they are sure to leave you thirsty for more.

There’s no supernatural folklore surrounding vampires in Japan. No one goes around staking out heads or putting garlic on their windowsills to keep them away. But that doesn’t mean no one has ever imagined what Japanese vampires would look like—in fact, there are tons of examples of vampire-like creatures in Japanese fiction.

If you’re looking for a Japanese name for your Vampire character, this section is for you. Here, we’ve put together a collection of the best Japanese Vampire names that are sure to get you inspired.

If you’re playing Dungeons and Dragons, you may want to name your vampire character something that suits their personality and makes them stand out. You want something that’s going to strike fear into the hearts of your enemies and make comrades quake with envy.

Keeping this in mind, we have an extensive list of names that will meet the needs of gamers looking to create deep and immersive Vampire characters. Whether you’re looking for a dark, brooding name that brings to mind nights of drinking blood, or a noble name that calls to mind generations of unlife, we’ve got it.

Vampires have, for the most part, been a staple of horror stories and mythology. They’re characters that hide in the shadows, preying on the innocent and unsuspecting. From the time Count Dracula was created by the imagination of Bram Stoker, the fascination with vampires has continued to grow.

Do you need a name for your vampire character? One that’s dated back to the 1800s or before? A name that has history and a sense of intrigue about it, that’s still cool enough for today’s trendy vampire? Don’t worry! We are here to help. Here are a bunch of old vampire names that span across fiction, movies, television shows, and more.

Vampires have a reputation for being bloodthirsty and dangerous, but they’re also known as incredibly hot. Whether it’s the suave charm of Edward Cullen or the bad-boy edge of Angel in Buffy the Vampire Slayer, vampires have long been seen as sexy creatures of the night.

So if you’re planning to go as a vampire to your next Halloween party, it’s important that your name properly reflects both of those things. To help you out, we’ve put together a bunch of the hottest vampire names for you to choose from.

If you’re planning on becoming a vampire, you’re going to need a badass name. You’ll probably have a lot of fun in your new life, but there are some serious responsibilities that come along with being a vampire, like drinking blood and terrorizing helpless villagers, and they can’t be taken lightly. Vampires represent fear, and you’ll want a name that conveys that fear.

Lucky for you, we’ve compiled a list of some badass names for your new life as a terrifying (and very attractive) undead being. These names are sure to strike fear into the hearts of those unlucky enough to cross your path!

So there you have it—a list of vampire names to help you on your quest to find the perfect one. Whether you’re writing a novel, naming your D&D character, or just looking to add some Gothic flair to your life, this list must have sparked your imagination. Feel free to use any of them for your own creation—although we’d love it if you gave us credit!

That’s all for now! We hope you enjoyed this post. Whatever you choose, remember that the most important thing is that you love it. Pick a name that inspires you! After all, it’s going to be yours forever, so make sure it’s as unique and special as you are.

Thanks for visiting, and have a wonderful day 🙂

379 Spooky Halloween Phrases and Sayings to Get Scary