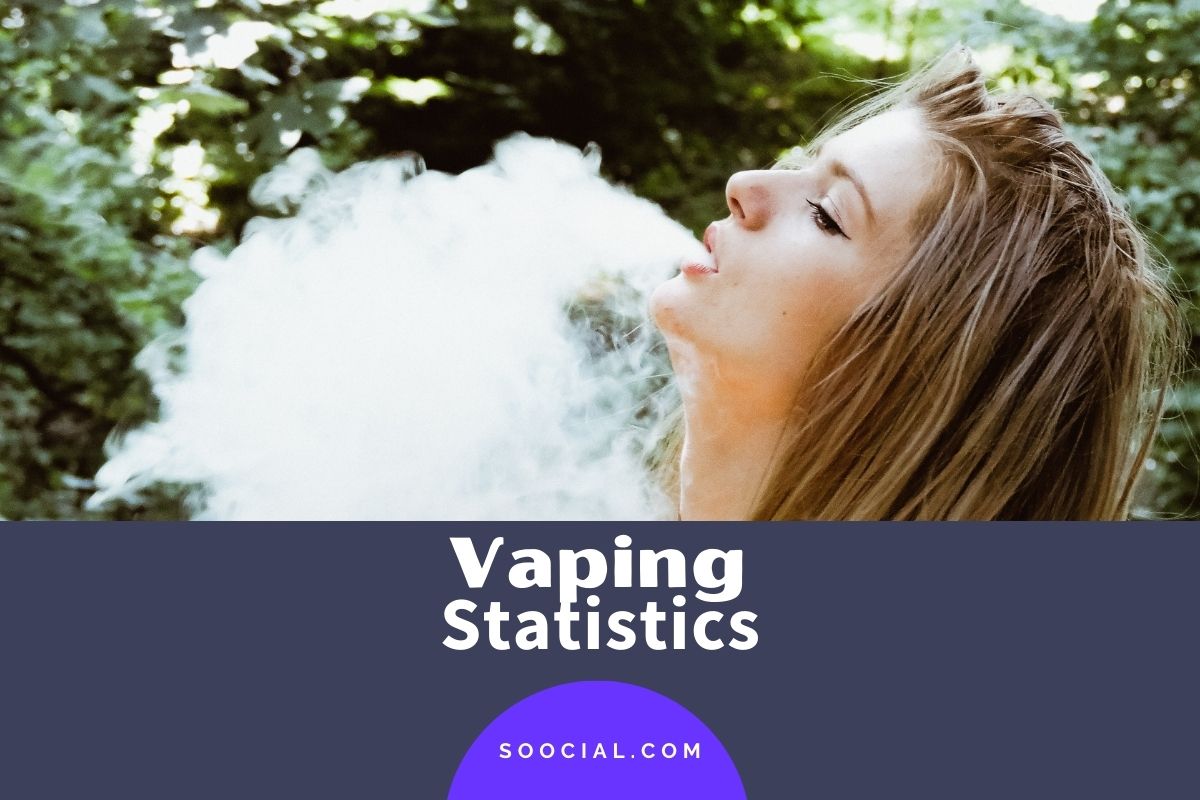 The most recent vaping statistics show the latest trends in the global e-cigarettes industry. For centuries, people have enjoyed tobacco products. Traditional cigarettes have become so popular that they were once considered a status symbol. It has long been a public secret that tobacco products have become dominant due to their specific composition.

Thanks to the nicotine and addiction this cigarette supplement produces, tobacco products have long been all the rage among people. However, many have seen the harmful effects of such products over time and have long sought an alternative. Electronic cigarettes emerged as a (less than) perfect solution.

Vaping products consist of small devices that are replenished with liquid. The same liquid is heated in the device and creates an aerosol, or vapor, hence the name. These products have various names, from steam to electronic cigarettes. They come in different shapes and tastes, which is why the number of users of these products increases every day.

The growing popularity of vaping is supported by the fact that an increasing number of studies unequivocally show vaping is less harmful compared to its traditional counterpart.

Cigarettes have always been peoples’ favorite pastime. While some were mere users of tobacco smoke, others became addicted to nicotine and its impact on their bodies. However, history shows that people have been looking for an alternative to tobacco products for decades.

Only with the advancement of technology were the conditions created for the development and popularization of the electronic alternative to tobacco products. Below you’ll find out how it all started.

Though we can look at vaping as a recently coined term, the idea of having e-cigarettes is much older. In 1930, an inventor named James Robinson was the first to patent electronic cigarettes.

However, his patent was never introduced to a broader audience. Moreover, there are no reports of his patent seeing the light of day.

2. In 2004, the first mass-market electronic cigarettes were introduced.

After the first patent, there were a few (unsuccessful) attempts of creating e-cigs back in the day. In the ’80s, Phil Ray and Norman Jacobson were first to create something that resembled e-cigarettes. Unfortunately, tobacco users didn’t connect with their devices, which ended as a failed attempt.

Only at the beginning of this millennium did we see the first successful batch of electronic cigarettes. This product originated in China, specifically in Beijing. After the patent in 2004, vaping devices slowly became trendy and started spreading from Europe to the U.S.

It wasn’t long before vaping jumped across the pond and hit the American continent. Just two years after the prototype of modern electronic cigarettes, vaping devices flooded the U.S.

The market responded quickly, and the emergence of purchasing channels led to the further development of these products. Relevant vaping statistics show these products first crossed U.S. borders in 2006.

Vaping is a relatively new term, but it has quickly taken hold of people of all ages. Some found an alternative to smoking in electronic cigarettes, while others were just looking for a leisurely pastime.

However, some saw vaping as a chance to fit in better with society. This refers to young people, primarily middle school and high school students. Some results were expected, while others were surprising. Let’s check the numbers.

Vaping popularity in the U.K. is on the rise. During 2012, only 1.7% of the British population enjoyed electronic cigarettes. The peak of their popularity came in 2019 when 7.1% of the population used these devices.

By 2020, the number of vaping device users decreased slightly, to 6.3%. In 2021, things started going back to normal. Hence, a total of 7.1% of the population uses these nicotine replacement devices.

The U.S. is facing an e-cig epidemic since around 2 million teens vape regularly. Moreover, almost half (approximately 43%) stated they use electronic cigarettes on a daily basis.

Flavored cigarettes are among the most popular type. Nearly 85% of teens stated they prefer using vapes with different flavors.

Despite government efforts to prevent selling vaping products to youngsters, a portion of teens in the U.S. still managed to find their way to e-cigarettes. Around 27.6% of high-school children reported using vaping devices daily.

What’s more, vaping also became a trend among the younger population. One in twelve middle school students stated they use e-cigarettes every day. In total, this number reached 8.3%.

8. 30% of students with medium-sized budgets are more likely to use e-cigs.

Sometimes, telling your teens to spend pocket money however they want can have consequences on their health. Studies show that not only U.S. kids are at risk of e-cigarettes, but also teens from E.U. countries.

Teens with larger budgets are more likely to spend their money buying e-cigs than those with little to no cash, which is understandable.

Additionally, the same study shows that teens from Poland and Latvia with a mid-size allowance are more likely to purchase vaping products compared to their peers with lesser budgets.

In other words, one in three students with a medium-sized allowance will spend their cash on e-cigs.

9. 57.1% of high-school students obtain vaping products from their friends.

More than half of them (57.1%) stated they obtain e-cigarettes from their friends. On the other hand, around 58.9% of middle-school students reported using the same method.

10. Retail stores are the primary source of e-cig knowledge among 68% of young people.

Have you ever thought about the way young people find out about vaping? The Internet would probably be the first guess for many, considering the fact youngsters are more tech-savvy than older generations. However, the reality is that only 41% of youngsters first come across e-cigs via social networks.

Almost 68% of young people find out about vaping products through retail stores’ advertisements.

Young adults in their late teens and 20s are most likely to use e-cigarettes. Nearly 17% of 18- to 29-year-olds reported regularly vaping while the national average in the US is 6%.

12. Americans with household incomes under $40,000 are 1.4 times more likely than other income groups to use e-cigarettes.

Therefore, more and more people are replacing cigarette filters with rechargeable electronic devices. Let’s see what impact this has on the e-cig market.

E-cigarettes represent the majority of the global U.S. tobacco landscape. There are more than 3,000 different vaping flavors available in the U.S. market.

Before online marketplaces kicked in, people could obtain vaping products in retail stores. In 2020, most e-liquid products were available at gas stations and vape stores. Users could test various devices before making a decision on whether or not to buy a product.

Many people consider vaping to be healthier than smoking cigarettes. This is just one of many causes why the e-cigarettes market has been booming. The vaping companies’ business model plays no small part in the global e-cigs market size.

One of the biggest causes of the growing value of vaping products is the consumer’s desire to reduce or abandon tobacco products. Also, e-cigarettes are gaining popularity because more and more people believe they are less harmful than their traditional counterparts. As a result, vaping products reached a $20.4 billion market value in 2021.

Vaping is not popular in every region. Some countries have either partially or entirely banned vaping products. While some believe these countries did their best to maintain public health, others believe such decisions are motivated by a hidden agenda.

Nonetheless, some regions prohibited the sale, import, and manufacture of e-cigarettes, while others went a step further and prohibited transport, distribution, and storage. In total, 47 countries declared war on e-liquid products.

According to a study conducted in 2020, slightly more than half of the vapers (53%) prefer to use one device. Also, the same paper included testing on people using multiple devices. As many as 43% of correspondents stated they use several devices to switch between flavors.

It’s no secret that in the new digital age, people frequently find themselves caught in the crossfire of various interest groups.

On the one hand, proponents of electronic cigarettes point out that this product is much healthier than traditional tobacco. However, some studies contradict these assertions. In between are people who aren’t sure who to trust.

As a result, about 9,700 people worldwide ask the same question every month – Is vaping safe?

The latest Truth Initiative study included a younger population aged 15-24. According to the data, slightly more than half of the respondents (54.2%) expressed a desire to stop vaping during the year. As a reason for this decision, the correspondents cited health, financial and social reasons.

There’s a correlation between the amount of cash spent at vape shops and consumer behavior. Higher budget consumers ($50 and more) typically use lower nicotine levels. On the other hand, they use more e-liquid. Those who spend less money on vaping reported the usage of a higher level of nicotine.

People spend from $10 to $250 per month on e-liquids. That said, individuals spend $50-$75 on average in vaping shops every month.

23. More than 66% of JUUL users aged 15-24 are unaware their products contain nicotine.

JUUL is the top-selling e-cig brand in the United States, and its products are usually people’s first pick. Since vaping has become more popular than ever, information about such products is just a click away.

Still, many people, especially the younger generation, aren’t that knowledgeable when it comes to these products. Consequently, only a third of users between 15 and 24 years of age are aware JUUL products contain nicotine.

It’s no secret that there have been numerous campaigns against smoking traditional cigarettes. Users and non-smokers alike are at the point where both groups are fully aware of the potential health consequences of consuming nicotine products. Consequently, the number of cigarette smokers declined within the last 30 years or so.

Vaping, on the other hand, doesn’t suffer from such bad publicity (yet). This activity is not approved by the U.S. Food and Drug Administration as a method to quit smoking.

Despite the absence of official permission, people still use it as a means to lower the usage of tobacco products. Still, 16% of adults in the United States continue to be more likely to smoke tobacco than vape.

As mentioned previously, people use vaping products for various reasons. Some have to do with curiosity while others help individuals blend into various social groups. However, the biggest reason is to quit smoking. Consequently, around 64.6% of people in the United Kingdom who vape are ex-smokers.

Vaping has become particularly trendy over the past couple of years. People typically associate it with a way to quit smoking cigarettes. Depending on the source, you’ll get different feedback regarding e-liquids and their harmfulness/positive effects on the human body.

However, despite conflicting information, this industry is growing. The fact is that, among the people who enjoy vaping, most are ex-smokers. Recent vaping statistics have shown that more and more young people use e-cigarettes. Among them, middle-school and high-school students are most at risk. This information must be taken seriously.

The industry is not yet fully regulated and is under legal fire in dozens of countries. Time will tell whether or not vaping will heal from the stigma that has developed around it.

257 Vape Shop Name Ideas to Get Your Vape On