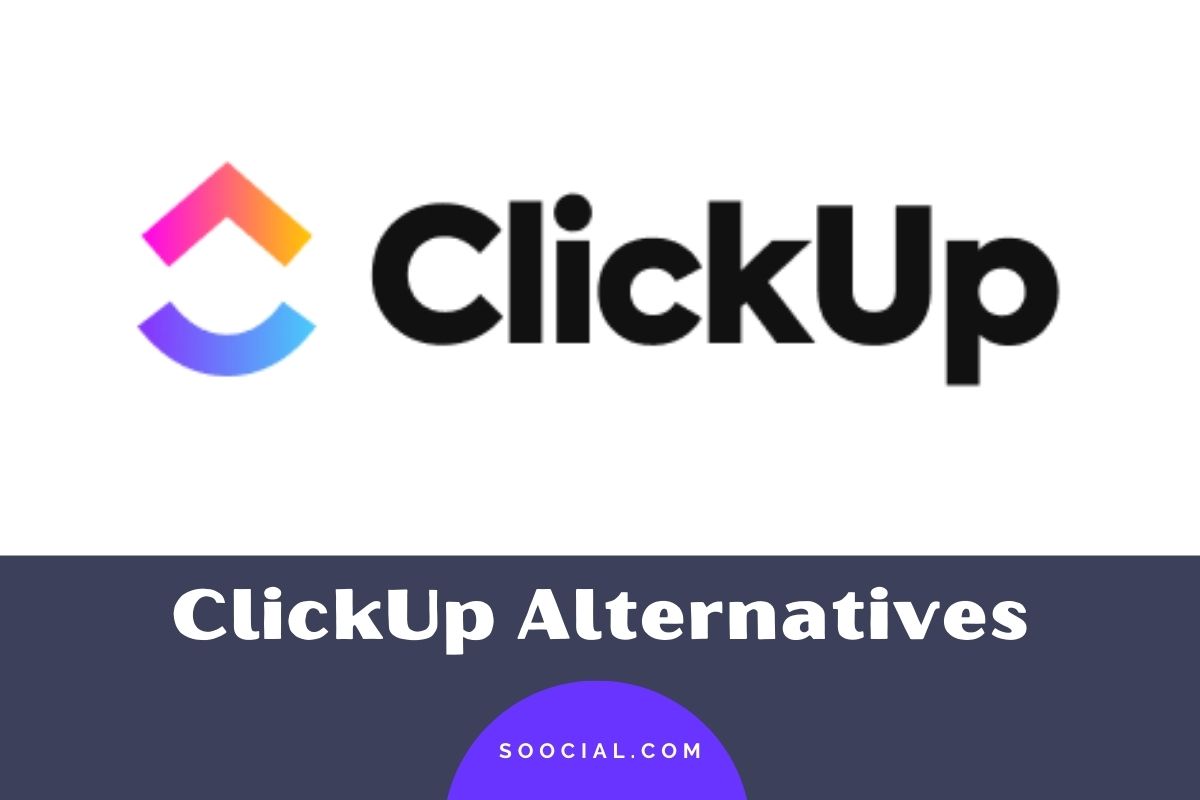 Given the increased focus on remote working, there has never been a more important time than now to invest in reliable project management and business management software; while ClickUp is reliable, what alternatives are there?

With hundreds of choices, the ten best and versatile ClickUp alternatives are:

Managers must consider the features of each to find the correct alternative for their team.

Each of the aforementioned project management services provides different features; let’s look at them now!

Trello is my personal project management system that I have used for both individual tasks and team projects.

Some of Trello’s key features are the following:

Trello is essentially a digital Kanban board, making it the perfect service for those looking for an easy-to-use drop and drag interface and visualization of multiple tasks at a glance.

Termed “Power-Ups,” Trello allows users to integrate a multitude of third-party apps and services to streamline and customize your boards to your liking.

Some of Trello’s drawbacks in comparison to ClickUp are the following:

ClickUp, in comparison, allows users to divide centralized goals into smaller team targets, which in turn automatically contribute to the overall progress bar of the larger goal for ease of management and data capturing.

Trello lacks task dependencies, meaning that teams do not have an easy timeline to follow to ensure a task is done in the correct order.

ClickUp has task dependencies, meaning certain team members may be restricted from accessing and working on a task should the prior steps not have been taken.

In contrast, ClickUp offers multiple customizable views to its users.

Task Pigeon prides itself on being a simple to use task management tool for teams looking to get work done easily and efficiently.

Some of Task Pigeon’s key features are the following:

Task Pigeon offers teams multiple views of their work and tasks, which can be easily tabbed between with simply the push of a button.

Task Pigeon includes the option of checklists on all work and tasks to be performed, allowing for ease of management, organization, and data capturing.

Some of Task Pigeon’s drawbacks in comparison to ClickUp are the following:

While Task Pigeon is ideal for the completion of predetermined tasks, it lacks a brainstorming feature or note-taking capabilities unless third-party integrations are installed.

Meanwhile, ClickUp has both Notepad and Docs preinstalled for note-taking and brainstorming.

Similar to Trello mentioned above, Task Pigeon does not have task dependency management software, while ClickUp does.

In contrast, ClickUp has both Pulse and Profiles to allow users to see how their team is doing and to reassign work in a matter of seconds.

Basecamp advertises itself as the all-in-one toolkit for working remotely, with a focus on project management and team communication.

Some of Basecamp’s key features are the following:

Basecamps allows a manager to create to-do lists for team members for tasks and subtasks easily and efficiently.

Basecamp’s focus on communication means it has a built-in commenting system that allows team members to exchange ideas, files and provide project updates.

Basecamp provides various types of team reports to allow managers of all departments to look at the efficiency of their department, the overall performance of the company, which member is working on what task, etc.

Some of Basecamp’s drawbacks in comparison to ClickUp are the following:

Basecamp doesn’t allow its users to highlight the importance of tasks, while ClickUp has prioritization functionality to indicate to team members which tasks are more pressing than others.

Although Basecamp does offer comprehensive task statuses, the lack of customization means that certain statuses automatically assigned to certain tasks may be irrelevant.

Basecamp does not have time management software to manage deadlines and to predict time estimates on projects.

ClickUp provides time tracking integration with both Clockify and TimeDoctor.

Swit serves as a collaboration tool to help teams work together effectively and efficiently.

Some of Swit’s key features are the following:

Similar to Trello mentioned above, Swit features an easy-to-use drop and drag interface reminiscent of a digital Kanban board.

Swit understands the need for third-party interactions and collaborations; as such, it provides project managers with a multitude of permission settings to allow for the addition and removal of freelancers or clients to discussions.

Some of Swit’s drawbacks in comparison to ClickUp are the following:

Swit provides minimal team reporting software, as its focus is on communication and collaboration.

In contrast, ClickUp offers Dashboards and Reports as key features for reporting purposes.

Swit relies on manual delegation and communication rather than automated task management, whereas ClickUp has various integrations to allow for automation on its platform.

Swit lacks templates in contrast to most of its competitors, including ClickUp, which has built-in templates, as well as the option to save user-created templates for future use.

Pipefy prides itself on being an easy-to-use automated project management tool.

Some of Pipefy’s key features are the following:

Pipefy provides some of the most advanced work functionality, which allows the creation of detailed forms with conditional logic that can change based on input.

Pipefy allows users and managers to easily find and assign tasks by allowing for custom filtering of tasks depending on fields, priorities, content, size, etc.

Some of Pipefy’s drawbacks in comparison to ClickUp are the following:

Without the ability to assign comments to particular team members, Pipefy would be seen to lack an organization tool that ClickUp uses to improve ease of communication.

Reviews suggest that while Pipefy is a powerful tool on desktop, it lacks the ease of use and functionality on mobile devices that ClickUp has.

Unlike ClickUp’s aforementioned Pulse and Profiles features, Pipefy lacks the tools needed to accurately view which task that each member of the team is working on at any given moment.

Slenke prides itself as a tool for managing remote teams on multiple projects.

Some of Slenke’s key features are the following:

Slenke allows each project or task to have a timeline view, allowing project managers and users to quickly and easily see how far along a project is to completion.

Slenke allows project managers to prioritize tasks and projects subject to their own customization and needs.

Some of Slenke’s drawbacks in comparison to ClickUp are the following:

Slenke, unlike ClickUp, does not allow users to automate workflow, meaning that recurring tasks need to be manually designated.

Although Slenke does have comment functionality, it does not allow users to assign comments to other work colleagues in the same way that ClickUp does.

While ClickUp comes equipped with Docs and Notepad to allow for the easy brainstorming and transferring of ideas among its users, Slenke needs third-party integration from Google Docs or other apps to do so.

Some of Meistertask’s key features are the following:

Meistertask comes equipped with customizable automation functionality to assist in the delegation of recurring tasks, meetings, and notifications.

Meistertask’s Agenda acts as a homepage and project hub for users; this allows for maximum accessibility of tasks and projects with ease.

Some of Meistertask’s drawbacks in comparison to ClickUp are the following:

Similar to the drawbacks with other digital Kanban boards outlined above, Meistertask does not provide various views in a way that ClickUp does.

Meistertask does not allow for custom statuses on the steps of a project, leading to instances where statuses may not reflect the nature of the project in question.

While ClickUp has a dedicated and highly regarded mobile app, reviews suggest that Meistertask’s mobile app has reduced functionality and user ability when compared to the desktop version.

Hive prides itself as being a leader in remote working assistance and project management.

Some of Hive’s key features are the following:

Hive allows users to easily tab between multiple views, including but not limited to lists, Kanban boards, or Gantt charts.

Hive allows users to create and customize forms for all their company’s needs, departments, and metrics for ease of data capturing.

Some of Hive’s drawbacks in comparison to ClickUp are the following:

Unlike ClickUp, Hive does not support dependencies; this may result in users attempting to perform wrong tasks at incorrect times.

While ClickUp streamlines its notifications into a separate inbox, user reviews suggest that Hive’s notifications can serve as a distraction that is difficult to store and navigate for future revision.

Asana is one of the most popular project-management tools on the market.

Some of Asana’s key features are the following:

Asana provides a simple and effective method for teams to communicate, share ideas, and files with each other.

Asana allows users to include custom timelines on their projects and tasks for ease in the form of Gantt charts.

Asana allows users to easily and seamlessly install third-party integrations like Gmail, Dropbox, and Slack, among others.

Some of Asana’s drawbacks in comparison to ClickUp are the following:

Asana does not allow for custom statuses on the steps of a project, leading to instances where statuses may not reflect the nature of the project in question.

Asana only allows one member designation per task, meaning that multiple members working on single projects may have difficulty collaborating on Asana’s platform.

Meanwhile, ClickUp allows for multiple assignees on tasks and projects.

ClickUp understands the importance of third-party collaboration, but not at the expense of privacy or security, whereby users have full control over visibility.

Some of Jira’s key features are the following:

Jira allows full customization of workflows for each project, meaning no standardization of steps to be taken.

Some of Jira’s drawbacks in comparison to ClickUp are the following:

Jira requires that tasks be individually monitored, as it does not have a built-in timeline, whereas ClickUp does.

Unlike ClickUp, Jira does not have a built-in comment feature, making team collaboration difficult and reliant on third-party resources.

While ClickUp has both Notepad and Docs to assist idea management and brainstorming, Jira lacks an equivalent feature.

Project management development is an evolving space; subsequently, while ClickUp is one of the most popular options, managers should remain on the lookout for alternatives that may provide features that serve their business needs!

There you have it, folks. These are the top ClickUp alternatives that we have found. We have done our due diligence and made sure that these tools will be able to solve your ClickUp issues.

Of course, if you do come across any other alternatives out there, please let us know about them! And if you found this article helpful, feel free to share this with anyone who could benefit from these tools.

How Does ClickUp Make Money? Business Model of ClickUp