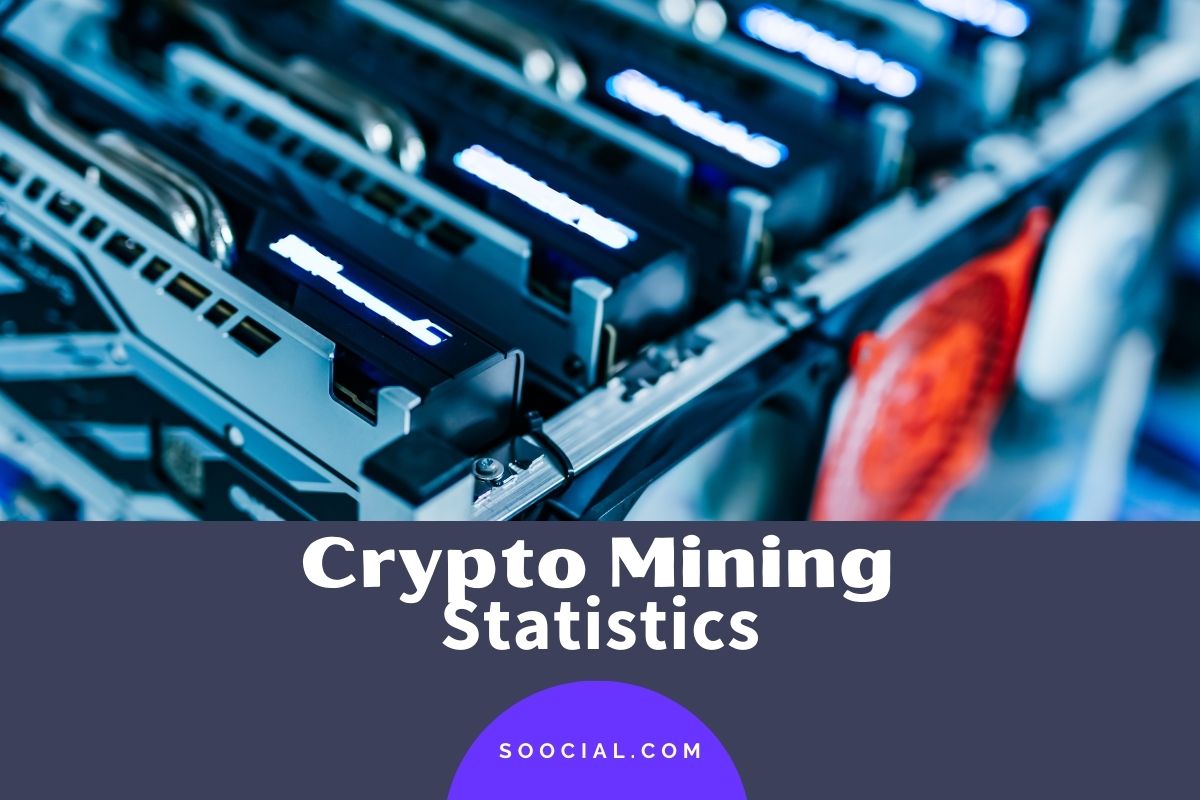 Crypto mining is the process by which cryptocurrencies are brought into existence as a part of the blockchain network. Miners use algorithms to solve complex mathematical hashing ‘puzzles’ to unlock ‘blocks.’ In return, these miners get a reward in the form of cryptocurrency.

In this blog post, we will give you an insight into the cryptocurrency mining market through 19 well-curated statistics. Here’s a summary.

The most popular of the mined cryptos is Bitcoin. The mining process of Bitcoin globally consumes more electricity than many countries. While its price keeps hitting newer highs every few months, mining is proving to be less cost-effective with time. Innovations have given rise to newer cryptocurrencies that are sustainable, cost-effective, and profitable to mine.

Contents show
Crypto Mining Statistics
1. The crypto mining market is valued at around $2 billion and is expected to grow by 7.05% annually.
2. The US accounts for the largest share of cryptocurrency mining.
3. Only 21 million bitcoins can exist, and fewer than two million are left to mine.
4. In 2021, Bitcoin miners raised USD 2.3 billion in debt & USD 3.9 billion in equity.
5. Until China’s ban on crypto mining, its share of the global hash rate was 75%.
6. Bitcoin mining consumes nearly 150 TWh or 0.6% of the world’s electricity supply annually
7. Around 58% of the total electricity used in Bitcoin mining comes from renewable sources.
8. Bitcoin can be mined in as little as 10 minutes or as many as 30 days.
9. Bitcoin and Ethereum contribute to approximately 4% of global carbon emissions, annually.
10. Bitcoin mining uses up to 3 times as much energy as gold mining.
11. Polkadot is the most energy-efficient and carbon-friendly cryptocurrency.
12. In 2021, Bitcoin miners earned USD 15.3 billion, while Ethereum miners earned USD 16.5 billion.
13. Bitcoin mining generates 32.80 kilotonnes of electronic waste every year
14. In the first half of 2021, cryptojacking rose by 23%, reaching 51.1 million attacks.
15. By the end of 2021, 16 crypto mining companies were listed on the NASDAQ.
16. F2Pool is the world’s largest mining pool by hashrate.
17. Mining difficulty has doubled since the bottom reached after China’s ban.
18. Around 0.1% of all miners control nearly 50% of all mining capacity in Bitcoin.
19. Within 10 years, the reward for mining a bitcoin block has reduced from 50 BTC to 6.25 BTC
20. New York has the most bitcoin miners in the U.S., followed by Kentucky, Georgia, and Texas.
Conclusion
Sources

1. The crypto mining market is valued at around $2 billion and is expected to grow by 7.05% annually.

According to Verified Market Research, the cryptocurrency mining hardware market was valued at USD 1.49 billion in 2020. The market is expected to grow at a CAGR of 7.05% between 2021 and 2028.

By 2028, the crypto mining hardware market could be worth more than ~USD 2.58 billion.

2. The US accounts for the largest share of cryptocurrency mining.

Hashrate is the measure of computational power used to process and add blocks in a Proof-of-work (PoW) blockchain. The unit for hash rate is hash/second.

As of August 2021, according to Cambridge Bitcoin Electricity Consumption Index (CBECI), the United States accounted for 35.5%, Kazakhstan for 18.1%, and the Russian Federation for 11.2% of the total global hash rate.

These top 3 countries comprised ~65% of the worldwide hash rate.

3. Only 21 million bitcoins can exist, and fewer than two million are left to mine.

The approximate number of new bitcoins mined per day is 900. On average, 144 blocks are added to the blockchain daily and the reward for each block is 6.25 Bitcoin.

The last bitcoin is expected to be mined by the year 2140.

traded miners raised USD 1.4 billion. Nearly half was raised by issuing convertible notes. Around 93% of this debt was raised in the last quarter(Q4) of 2021.

On the other side, Miners raised a total of USD 3.9 billion in equity, of which publicly traded miners raised USD private miners accounted for USD 1.5 billion.

5. Until China’s ban on crypto mining, its share of the global hash rate was 75%.

China accounted for nearly ~75% or three-quarters of the global hash rate in the world. China started tightening the noose on cryptocurrencies by first banning financial institutions from indulging in cryptocurrencies.

In June 2021, China imposed a blanket ban on mining cryptocurrencies, after which China’s share in the global hash rate fell to 0%. After China imposed the ban on crypto mining, many Chinese miners moved their equipment to Kazakhstan, explaining a sudden spike in mining activity in the country.

Kazakhstan offers cheap real estate and relatively cheaper electricity, ideal for setting up crypto mining farms. These miners work anonymously, and therefore, one cannot get a clear picture of China’s contribution to the global hash rate.

By 2018, Bitmain Technologies Ltd, a Chinese company, was the world’s largest manufacturer of crypto mining equipment. After the ban in 2021, the business took a hit after the price of its top rigs slumped by 75% due to low or no demand. 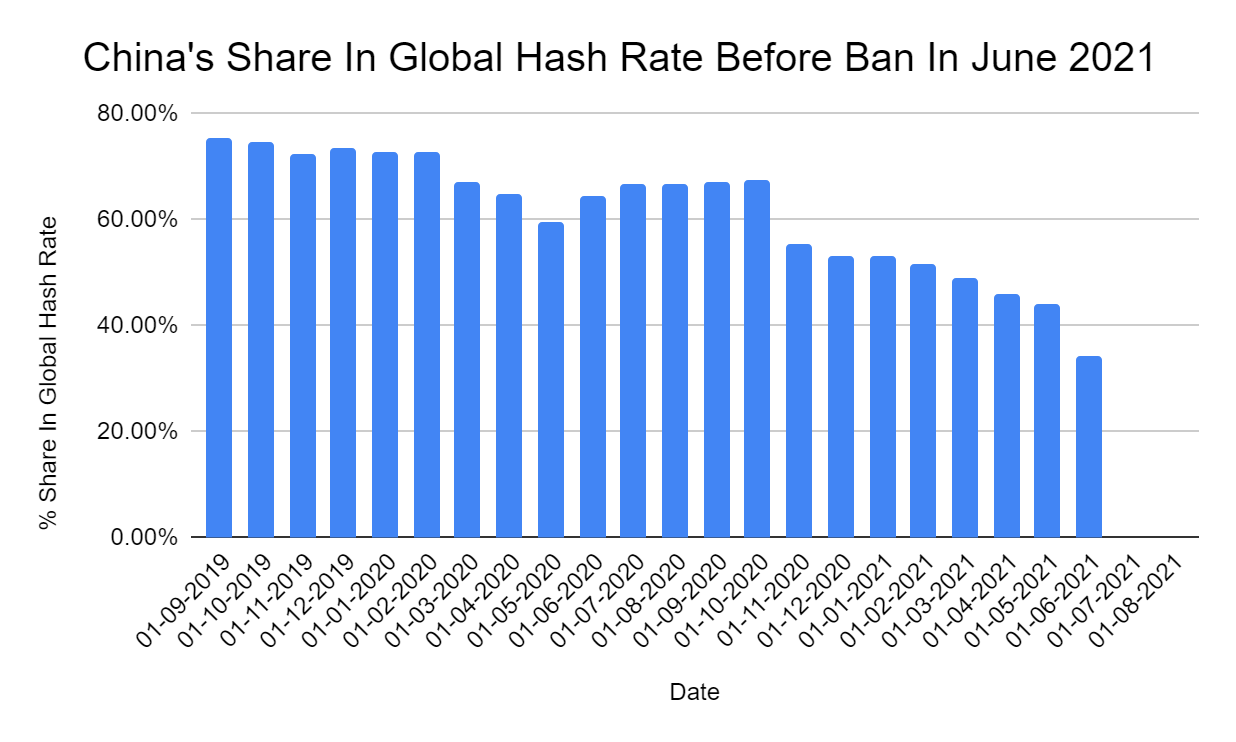 Over the years, the electricity required to mine a bitcoin has increased significantly. The supply of bitcoins is limited. The more they get mined, the harder it is to mine them further, a simple example of restricted supply and elastic demand.

The probability of one making a successful mine depends on the hash rate. The hash rate relies on many factors, one of them being computational power. The more the number of computers get added to the process, the higher is the energy demand.

As of February 14, 2022, the Ethereum network consumed an estimated ~113 TWh of electricity annually. While Ethereum was a low energy consumption crypto for quite some time, its demand and technological advancement have given energy demand a push. 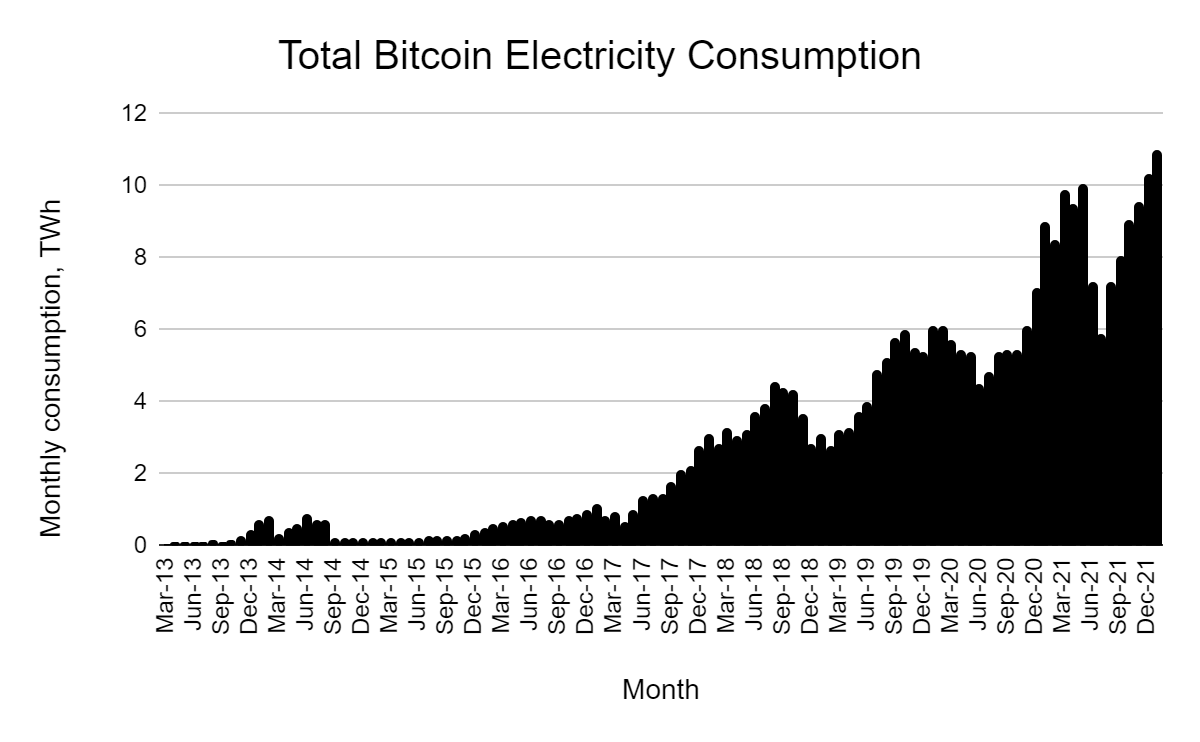 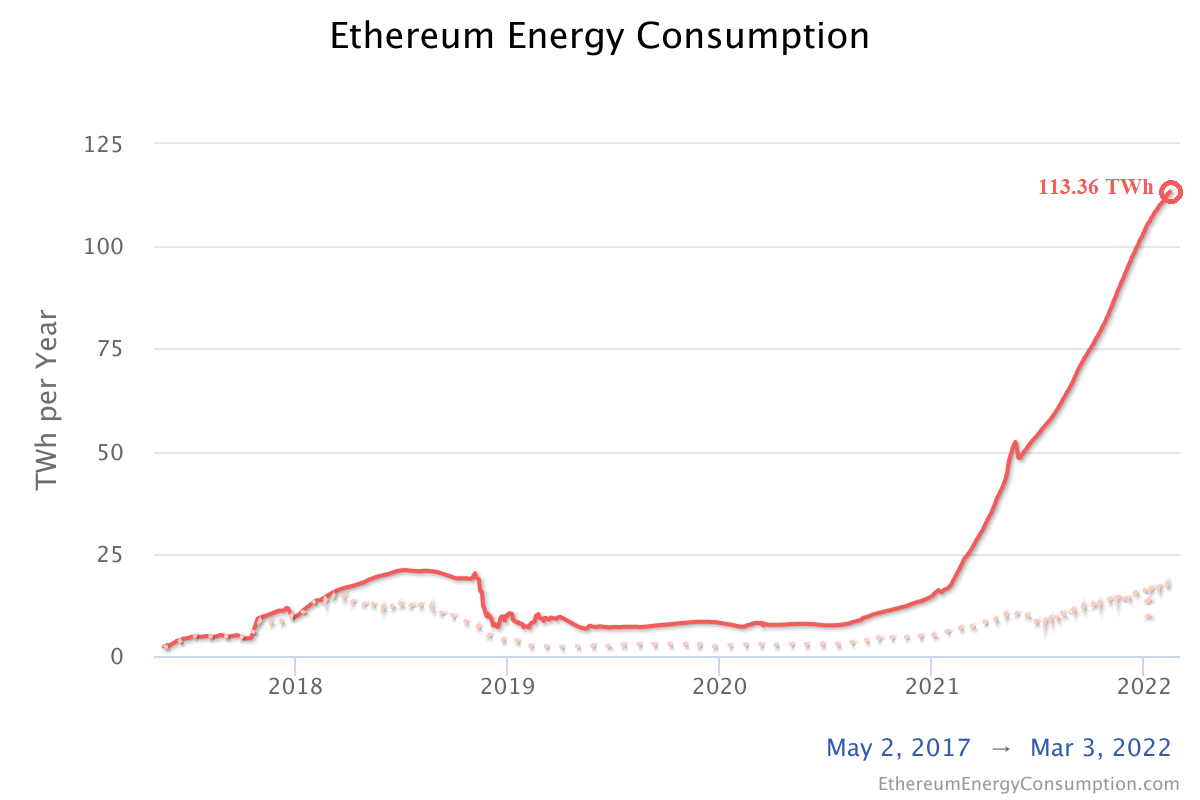 7. Around 58% of the total electricity used in Bitcoin mining comes from renewable sources.

The report also said that the Bitcoin Network’s global technological efficiency grew by 9% in Q4, to 19.3 petahash per MW.

The Bitcoin mining algorithm is made in a way to find new blocks once every 10 minutes, known as ‘Block Time’. Essentially, in 10 minutes, you can either mine one block (6.25 BTH) or absolutely nothing.

The time taken to mine a bitcoin can range anywhere from 10 minutes to 30 days, depending on how fast or extensive your mining system or pool is.

Similarly, the block time for Ethereum (ETH) is 12-14 minutes, and that of Dogecoin is 1 minute.

10. Bitcoin mining uses up to 3 times as much energy as gold mining.

According to a 2018 research paper by Max J. Krause & Thabet Tolaymat, Bitcoin mining took up nearly 17 megajoules to mine a USD 1 worth of Bitcoin while gold took only 5 megajoules for mining gold worth USD 1.

According to the same report, mining Ethereum, Litecoin, and Monero mining required 7, 7, and 14 megajoules, respectively. On the other hand, mining aluminum, copper, platinum, and rare earth oxides required 122, 4, 7, and 9 megajoules.

11. Polkadot is the most energy-efficient and carbon-friendly cryptocurrency.

According to Digiconomist, as of January 2021, Bitcoin mining generated 32.80 kilotonnes of electronic waste every year, comparable to the small IT equipment waste of the Netherlands.

Cryptojacking is the act of hijacking a computer to secretly mine cryptocurrencies against the users’ will.

According to a SonicWall report, Cryptojacking cases rose by 23% in 2021. The total number of such attacks stood at 51.1 million in the first half of 2021.

While the total number of attacks in North America rose by ~22%, total attacks in Asia grew by a staggering ~118% and in Europe by ~248%.

According to Galaxy Digital Research, the number of crypto mining companies listed on NASDAQ rose from 6 in Q1 2021 to 16 in Q2 2021, with seven additional listings pending. The numbers are expected to grow throughout 2022.

16. F2Pool is the world’s largest mining pool by hashrate.

According to BTC.com, F2Pool is the largest bitcoin mining pool by hash rate share and the number of blocks mined. F2Pool’s share of the total Bitcoin network hash rate is 9.54%; it has mined 69,128 blocks to date.

FoundryUSA, F2Pool, AntPool, Poolin, and ViaBTC are the largest mining pools in the world, all situated in the United States.

17. Mining difficulty has doubled since the bottom reached after China’s ban.

Mining Difficulty is a measure of how difficult it is to mine a Bitcoin block below a certain hash. As mining activity increases, mining difficulty also increases due to the simple principle of demand and supply.

As of February 2022, the mining difficulty of Bitcoin stood at nearly ~27.96 trillion TH/s.

After mining activity normalized, the mining difficulty for Bitcoin grew by nearly ~105% as of February 2022. 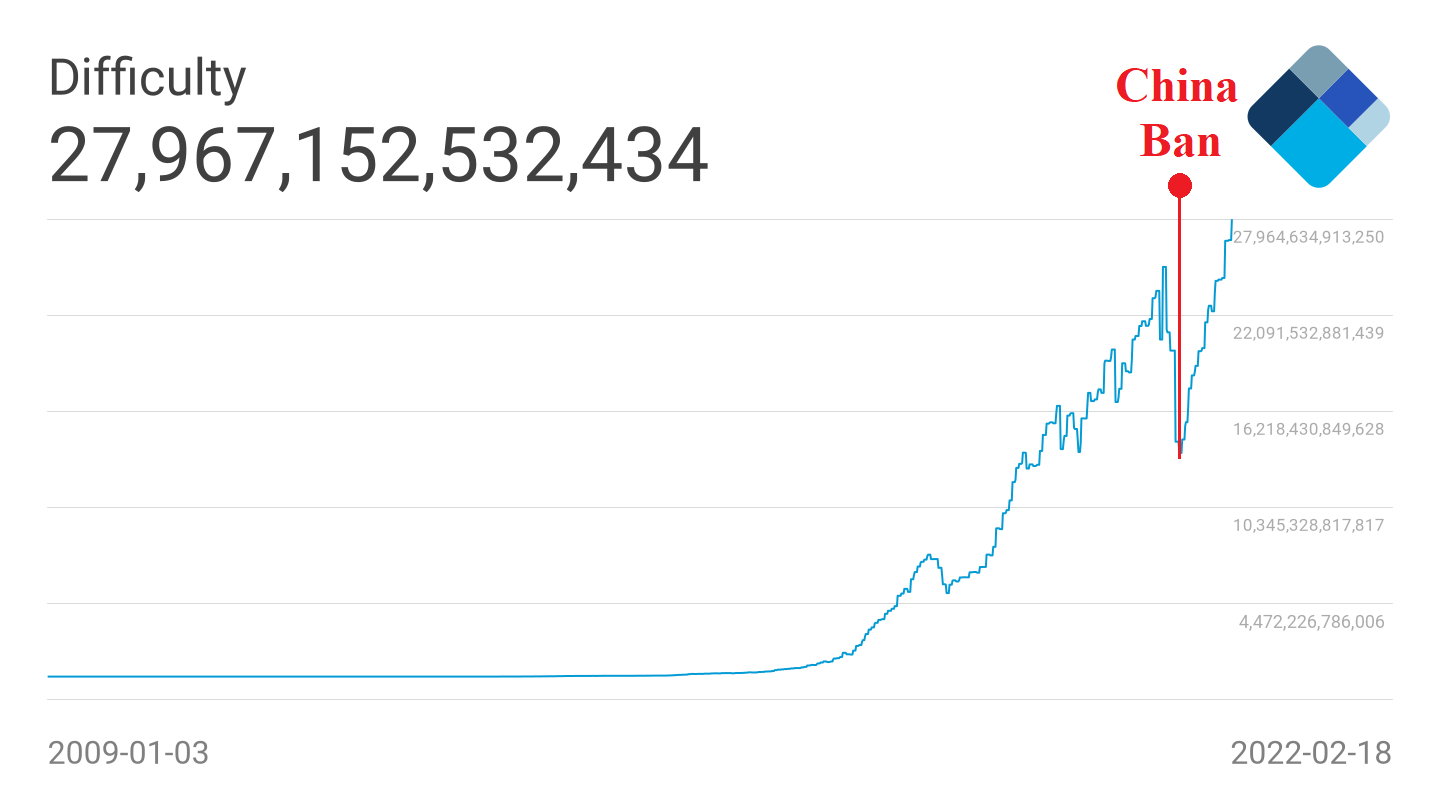 A 51% attack is when a person or a group controls more than 50% of a blockchain’s hashing power. This allows the attacker to exploit, alter, and disrupt transactions or mining processes in the network.

Bitcoin halving is a pre-written event in many blockchain networks where the reward for mining particular crypto is reduced to half of the previous one.

The ‘halving event’ takes place every 210,000 blocks that are mined for an estimated 4 years. The last halving event took place in May 2020.

20. New York has the most bitcoin miners in the U.S., followed by Kentucky, Georgia, and Texas.

Within the U.S., New York, Kentucky, Georgia, and Texas are the biggest hubs for bitcoin mining, says a company that runs the largest mining pool in North America and is the world’s fifth-largest pool overall.

Whew! That was a LOT of statistics, wasn’t it? We hope you learned something new, and now have a better understanding of how the crypto mining industry works.

From the staggering profits to the growing number of active miners, it’s clear that cryptocurrency mining is an opportunity that many people are seizing.

As more people become interested in cryptocurrency and realize that it’s not just a flash in the pan, more companies are going to set up shop and start mining. We’re excited to see where this industry goes in the future, and what new developments will happen within it.

Well, we’re out of time here but we’d love to hear from you—did you know any of these statistics before reading this article? Did any of them surprise you? Let us know!

Top 12 Binance Alternatives (And Why They Are Better)