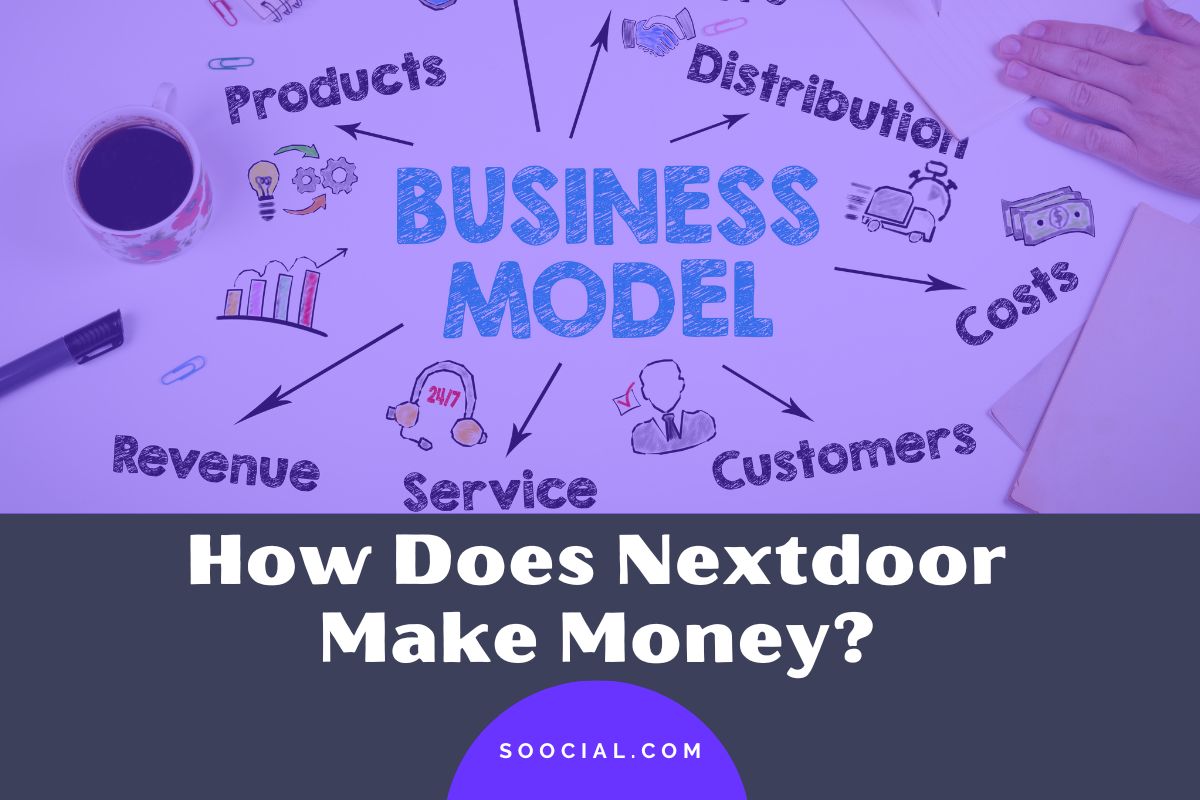 Nextdoor is a popular hyperlocal social networking service for neighborhoods. The company has a few methods of generating revenue.

Founded in 2008 in San Francisco by Nirav Tolia, Sarah Leary, Prakash Janakiraman, and David Wiesen, Nextdoor is known for its hyperlocal approach to social media. The networking tool focuses on consumers and businesses in their neighborhoods of residence.

The company aims to foster kinder community interactions. For example, Nextdoor partnered with the American Red Cross and Centers for Disease Control to act as a communication tool during the coronavirus crisis. [1] The company reported an increase in user engagement of 80% during the first month of the pandemic. [2] The company also partners with Vote.org to offer an interactive Vote Map during elections and encourage civic participation. [3]

Nextdoor became a publicly traded company in November 2021. [4] It trades on the New York Stock Exchange under the KIND symbol.

What is Nextdoor & How Does It Work?

Nextdoor is a social networking platform for local neighborhoods. In 2021, there were 63 million Nextdoor users [5] in more than 280,000 neighborhoods across 11 countries. [6] In addition to the United States, Nextdoor is active in the U.K., the Netherlands, Germany, France, Italy, Spain, Australia, Sweden, Denmark, and Canada.

Nearly one-third of American households use the network.[7] Nextdoor allows neighbors to connect and share information based on their geographical location. To join Nextdoor, users can download it to their iOS or Android devices or sign up on the website.

Users must register their real names on the network. They also must confirm their address to be placed into a neighborhood group.

People use Nextdoor to access a variety of relevant local topics, including:

Once registered, users can join different groups based on their areas of interest. People can connect with other nearby neighbors or users from their contacts. Users can post messages to anyone on the platform or directly to their home neighborhood.

Local businesses can set up pages on the network. They can easily publish their list of services, hours, and location. Businesses can engage with potential customers directly through private messages and responding to post comments.

Nextdoor users can tag businesses when making local recommendations, which is good for the business. Research shows that 90% of people are more likely to trust a recommended brand, even if they don’t know the person making the recommendation.[8]

One of the benefits of Nextdoor is its focus on local connection. Neighbors can alert each other to thefts or recommend a great local business. This makes the platform conducive to building local relationships and boosting awareness of local businesses and services. Users can also become more aware of local news, events, and risks in their areas.

According to the company, 73% of users say that neighbors are their most important community.[9] For parents, 30% say that meeting other local parents with same-age children is a top reason to join the platform.[10]

The platform is popular with its users. In August 2022, the platform received 75.7 million visits.[11] The average visit duration was over eight minutes long.[12]

The business model of Nextdoor is to foster hyperlocal online community through a free social network that they then monetize via advertisements.

Like with other social media networks, Nextdoor offers free use of the platform to encourage many people to use it regularly. They monetize their audience via advertising, including branded partnerships.

Nextdoor has three distinct streams of advertising revenue. The company makes money via sponsored posts, local deals, and neighborhood sponsorships. Nextdoor’s value proposition to their advertisers is the ability to target customers within 30 miles of the business.

Nextdoor has an enticing value proposition for users. On apps like Facebook marketplace, users can’t be sure that they are interacting with a real person from their area. Nextdoor’s emphasis on validating users’ real names and addresses provides a greater sense of trust and security on the platform.

Nextdoor’s value proposition to advertisers is unique in that it offers up a network of local users. In August 2022 in the United States, the company’s site held the number one rank for the search term neighborhood. [15]

On average, 20% of the platform’s users earn over $75,000 per year, and 24% hold a college education or higher.[16] Local businesses, realtors, and real estate companies are natural matches for Nextdoor’s educated, higher-earning consumers.

Unfortunately, the company’s reputation as a site for negative content and neighbors who snitch on each other could have an impact on revenue. The company itself has admitted that toxic content drives short-term engagement. However, over a six-month period, that exposure to toxic content on the platform drives users away. [17]

According to the company, many of their advertisers do not have long-term advertising spend commitments with Nextdoor.[18] The advertisers who do spend will only do business with the company if their ad spends are effective. This single method of generating revenue represents a risk to the long-term health and growth of the company.

Nextdoor faces direct competition from many different companies. Its focus on local reviews is similar to big players like Yelp and Google. In local buying and selling, Nextdoor’s rivals are Facebook Marketplace, Kijiji, Poshmark, eBay, OfferUp, and Decluttr. When it comes to social networking and local news, Facebook, Twitter, and Reddit are all big competitors. Facebook Groups and Business pages offer similar value to users.

Nextdoor has over 600 employees[19], and there are significant costs associated with running the platform. According to the company’s annual report, total costs and expenses for the past two years ranged from $199.9 million in 2020 to $287 million in 2021.[20]

How Does Nextdoor Make Money?

Nextdoor makes money via a few different methods of online display advertising on its platform. These include sponsored posts, local deals, and neighborhood sponsorships.

Nextdoor does not break down how much they make from various revenue streams in their annual report. However, CEO Sarah Friar aims to make the company a worldwide player, which would increase their revenue base. [22]

Sponsored posts allow businesses to build awareness for their brand with local relevance and context. Sponsored posts can be placed in users’ newsfeeds.

These ads usually include the following details about a business:

Nextdoor recommends that businesses make their images and copy clear, local, and relevant to the neighborhood.

Local deals are meant for individuals offering services and local businesses to share promotions and discounts with their Nextdoor neighbors. A business needs to have claimed their business page on the platform to share a deal.

The types of deals that can be offered on the platform include:

Advertisers must specify details about their deal. They must indicate information about their business so that users who want to claim the deal can easily contact them.

Advertisers can select a one-time, specific duration for their local deal purchase. Or they can purchase a monthly subscription that will automatically renew.

Advertisers can select the audience that will see their local deal from between a two and 10-mile radius of their business address.

Currently, local deals are only available for Nextdoor users in the United States.

Neighborhood sponsorships are the advertising solution for real estate agents on Nextdoor. The realtor must create a page for their brokerage on the platform, then claim their business on the site. Once they’ve done so, they can purchase ads that will be displayed on the site based on set zip codes.

Realtors can sponsor as many neighborhoods as they choose. They are charged a set fee based on criteria like how many other realtors are actively sponsoring the area or how many neighbors are using Nextoor in that area.

Since Nextdoor has a real estate tab that can be used to search available listings, the ability for a realtor to sponsor their ad at the top of the feed can be important for lead generation.

Realtors can also purchase branded listings to include personal branding alongside their own listings. However, the branded listings service was discontinued for agents who hadn’t signed up for it before July 22, 2019. Branded listings are purchased on an annual or semi-annual basis.

Nextdoor does not list how much they charge for each type of ad on their site.

However, the company has continued to lose money. They lost $95.3 million in 2021. That was up from the $75.2 million that they lost in 2020. That is likely because the company is continuing to invest in growth as they try to enter new markets and expand globally.

Nextdoor is not currently profitable. The company has lost money over the past two years. While Nextdoor is steadily increasing its revenue and generated $123.3 million in gross revenue in 2021, it lost $95.3 million that year.

It isn’t clear if the company will be able to generate a profit in the future, but it does seem like some of the losses are connected to investment in new markets. Nextdoor has stated that the company has aggressive growth plans for expanding into new countries.

If Nextdoor can diversify its income streams from its current advertising model or reach a global audience, it may be able to generate a profit in the future.

In conclusion, Nextdoor is a company that has been able to establish itself as the leading social media platform for neighborhood communication. Nextdoor is a great example of a business model that works by using the power of communities.

Their business model is based on providing a free service that can be used by anyone with an internet connection, but they make money by selling advertising space to local businesses. They are able to do this because their users are willing to give up their personal information in exchange for the privilege of being able to communicate with other people in their neighborhood.

Nextdoor has allowed for communities to form around shared interests, which can lead to increased civic engagement and participation in community events. While it may not be the most exciting topic, it’s definitely something we should be paying attention to!