You’ve been looking for statistics about coding bootcamps for weeks.

You’re on the fence about whether or not to take the plunge, and the last thing you want to do is make a mistake with your career.

You’ve probably heard that coding bootcamps are a great way to learn to code and get a job as a developer. But how many people have actually done it? What kind of jobs do graduates get? How much money do they make?

We get it. And that’s why we’ve rounded up the latest coding bootcamp statistics that will answer all of your questions and more. You’ll be able to read about everything from the average cost of tuition at these programs to how many people graduate each year and what kinds of jobs they get afterward.

This list is perfect for anyone considering taking a coding bootcamp or someone who’s already in one and wants some stats about their peers’ experiences!

We’re going to give you everything you need to know in one place so that you can make an informed decision and get back to being productive!

The above figure includes 9,356 students that attended the bootcamps in person, 15,619 online students, and 25,162 corporate training graduates.

In 2013 there were only 2,178 coding bootcamp graduates. Since then, the number has increased every year, with 2018 being the only exception, when it dropped by 761 students.

Excluding corporate training graduates 18,027 students completed their coding bootcamp studies in 2019, while their number grew by 39%, to 24,975 the following year. 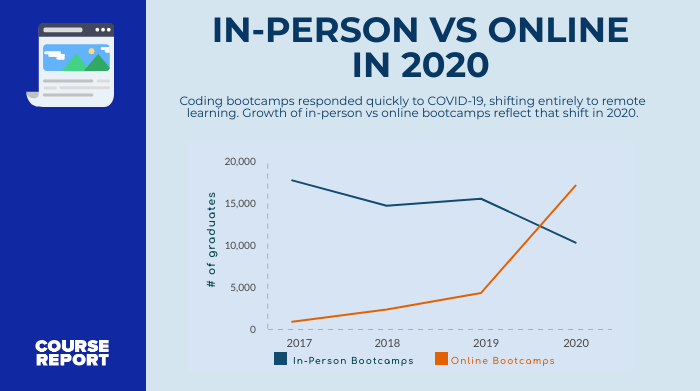 According to these tuition prices and the estimated number of bootcampers, the total coding bootcamp market size is estimated to be $349 million (or $349,426,408 to be exact)

4. The largest portion, or 33% of coding bootcamp students, pay for their tuition themselves, without getting a loan.

On the other hand, 23% get an external loan to cover the costs of their coding bootcamp.

Another 16% of students pay their tuition with the help of school financing, and 12% rely on their families to cover the costs.

10% use scholarships, while 6% use their GI bill benefits to enroll in a coding bootcamp. Only 1% of students have their tuition costs covered by their employer.

5. Climb Credit is the most popular coding bootcamp lender, with 29% of students getting their loans from it.

Other popular lenders include Skills Fund, which give out loans to 23% of students, and Sallie Mae, which help 19% of students cover their tuition costs through an external loan.

6. There are 44 coding bootcamps in the greater New York City area, more than anywhere in the US.

The San Francisco Bay area is in second place with 31 bootcamps, while the greater Los Angeles area is a close third with 30.

Other metropolitan areas with a large number of bootcamps include Chicago with 22, Austin with 17, Seattle with 15, and Denver with 14 institutions. Boston, Washington, and Atlanta each have 13 coding bootcamps.

7. The average age of a coding bootcamp student is 31.

The stats also show that the median age of bootcampers is 30.

What is interesting is that both the average and the median age of bootcamp students have not changed and have remained 31 and 30 respectively, for three consecutive years between 2018 and 2020.

8. Women account for 35% of all graduates since the inception of coding bootcamps.

That is a notably higher percentage than women with traditional computer science degrees, which is 21%. Their share becomes even higher if we look at the numbers for 2020 only when they accounted for 41% of the graduates.

Women also have a slightly higher post-bootcamp employment rate than men, with 88% of them landing jobs, in comparison to the 86% of male graduates.

9. More than two-thirds (69%) of coding bootcamp graduates, are white.

The latest available data reveals that Asians account for 17%, Hispanics for 8%, and African Americans for 6% of coding bootcamp graduates. The share of Native American graduates is only 2%.

These stats show a very strong overrepresentation of Asian graduates, since their share of the US population is much lower, at 5%.

At the same time, African Americans are underrepresented, since they account for 13% of the US population, according to the 2010 census.

The latest available data points to another 7.4% being US citizens that were born outside of the US and 14.7% that are not US citizens. Additionally, only 8% of grads had served in the military.

The two far less popular options are the more specialized courses in mobile development, the choice of 5.6% and front-end development chosen by 4.1% of bootcampers.

12. JavaScript is the primary full-stack web development language taught at 50.3% of coding bootcamps.

13. 54.5% of the coding bootcamp mobile development courses are taught with iOS: Swift.

14. 79% of coding bootcamp graduates say that the skills they learned at bootcamp are useful in their new jobs.

They also rate their bootcamps highly, with an 8.76/10 satisfaction rating. They further claim their salaries have increased by 56% after graduating.

The average yearly salary for coding bootcamp graduates is $69,079.

15. 38% of students choose their coding bootcamp institution based on the alumni outcomes.

Other important factors for selecting the right bootcamp according to 19% of the students are the instructors, and the curriculum, which is the primary reason for 17%.

The facilities of the bootcamp are the most important reason to choose a bootcamp for only 2% of the students.

16. 6,776 LinkedIn users reported attending the General Assembly coding bootcamp on their accounts in 2020.

This was the coding bootcamp with the largest number of students according to the number of LinkedIn accounts reporting it.

Flatiron School was in second place with 3,347 users, and Springboard came third with 3,170.

Other bootcamps popular on LinkedIn included Lambda School with 2,935, Ironhack with 2,619 and BrainStation with 2,597 students.

17. 84% of coding bootcamps transitioned to fully online courses because of the Covid-19 pandemic.

Lockdowns didn’t change much for 12% of coding bootcamps, as they already provided remote learning before the pandemic.

Just 4% of the institutions did not migrate to online courses completely and either held hybrid classrooms or paused the enrollment.

18. The shift to remote learning changed programs’ length for 89% of coding bootcamps.

This transition also increased the demand for courses according to 47% of them. However, it did not change their acceptance rate too drastically, as 71% of bootcamps stated it remained the same as before the pandemic.

While 54% of bootcamps said they did not see any attrition, the success rate of job placement has lowered for 59% of them due to Covid-19.

19. 56% of attendees say they tried learning to code by themselves before joining their coding bootcamps.

This group of people is also the one with the largest number of graduates with 49%. Complete beginners accounted for 39% of coding bootcamp attendees, but 47% of graduates.

20. 25% of coding bootcamp graduates were unemployed before starting their course.

The latest available data reveals that most of the students, or 50% of them, were employed full-time before joining their bootcamps.

Students, freelancers, and part-time employees each accounted for 6% of the share. Another 5% of bootcampers are self-employed, and just 1% are homemakers.

21. 74% of coding bootcamp students have a bachelor’s or a higher degree of education.

The statistics show that coding bootcamps gradually become more attractive to students who have never gone to college. In 2017 they accounted for 22%, while in 2020, their share grew to 26%.

22. Only 2% of coding bootcamp graduates have a doctorate.

The latest available data reveals that the biggest portion of them, or 50%, have a bachelor’s degree, while 22% have a master’s degree of education.

Another 14% have a community college education, and 2% have a professional degree. Finally, 5% have an associate’s degree, and 6% are high school grads.

Interestingly, 0.2% of the bootcamp graduates don’t have a high school degree.

23. Just 5% of coding bootcamp graduates have a computer science background.

Contrary to popular belief, coding bootcamps are not the most appealing to IT professionals but, instead, to people from the business and public administration fields. They account for 15% of coding bootcamp grads while engineers account for 7%.

Another 7% come from life science fields of study and finally, people with psychology, philosophy and sociology backgrounds for 6% of the grads.

24. The largest portion, or 24% of the corporate training bootcampers, are financial service employees.

Employees of the agriculture, forestry and mining, and hospitality, food and leisure travel industries together only account for 2% of the bootcampers.

25. The main motivation for joining a coding bootcamp was getting a programming job for 91% of the students.

Additionally, 1% joined a bootcamp to get a promotion at their current work, and another 1% wanted to become freelancers after their course.

26. Amazon is the top coding bootcamp graduate employer for 2021, with 729 graduates hired.

However, 310 coding bootcamp graduates decided to remain self-employed and work as freelancers.

27. The largest number of graduates, or 32%, started working as software engineers after completing their course.

11% of coding bootcamp students started working as front-end developers and another 11% as junior web developers after graduating from their respective bootcamps.

Only 8% landed a job as a junior software engineer, and the percentages for other job titles are even smaller and less significant.

28. 367 of the graduates employed by Google were students of the General Assembly coding bootcamp.

Another 226 of the General Assembly coding bootcamp grads got a job at Amazon, 219 at Facebook, and 144 at Microsoft.

Another bootcamp with a large number of graduates hired by top employers is Hack Reactor, with 92 of them securing a job at Google, 69 at Facebook, and 43 at Amazon.

29. Students who were familiar with programming before coding bootcamp, earn about $3,000 more than complete beginners.

Similarly, students who took longer courses that lasted at least 16 weeks, earn about $8,000 more than those that graduated from eight-week-long bootcamps.

30. 50% of coding bootcamp graduates shifted to remote work during the Covid-19 pandemic.

Only 25% of bootcampers stated that the pandemic had no impact on their professional lives. 10% said that they graduated during Covid-19 and were unable to find a job.

Other 9% were laid off permanently or temporarily, while 1% took a pay cut.

We hope you enjoyed this journey together and learned some new things about coding bootcamps in the process.

As you can see, coding bootcamps are taking over the world. In fact, they are growing so fast that it is hard to keep track of all the new bootcamps and the people who are going to them.

This makes it important for us to continue tracking these statistics so we can see how they change over time and how they compare with other types of education.

We believe that a coding bootcamp is one of the best ways to break into a career in software development. The industry is growing, and there are so many opportunities for people who can build their own software.

If you have any questions about these stats or anything else related to learning code, please reach out to us. We’re always happy to help!

How Does Gitlab Make Money? Business Model of Gitlab