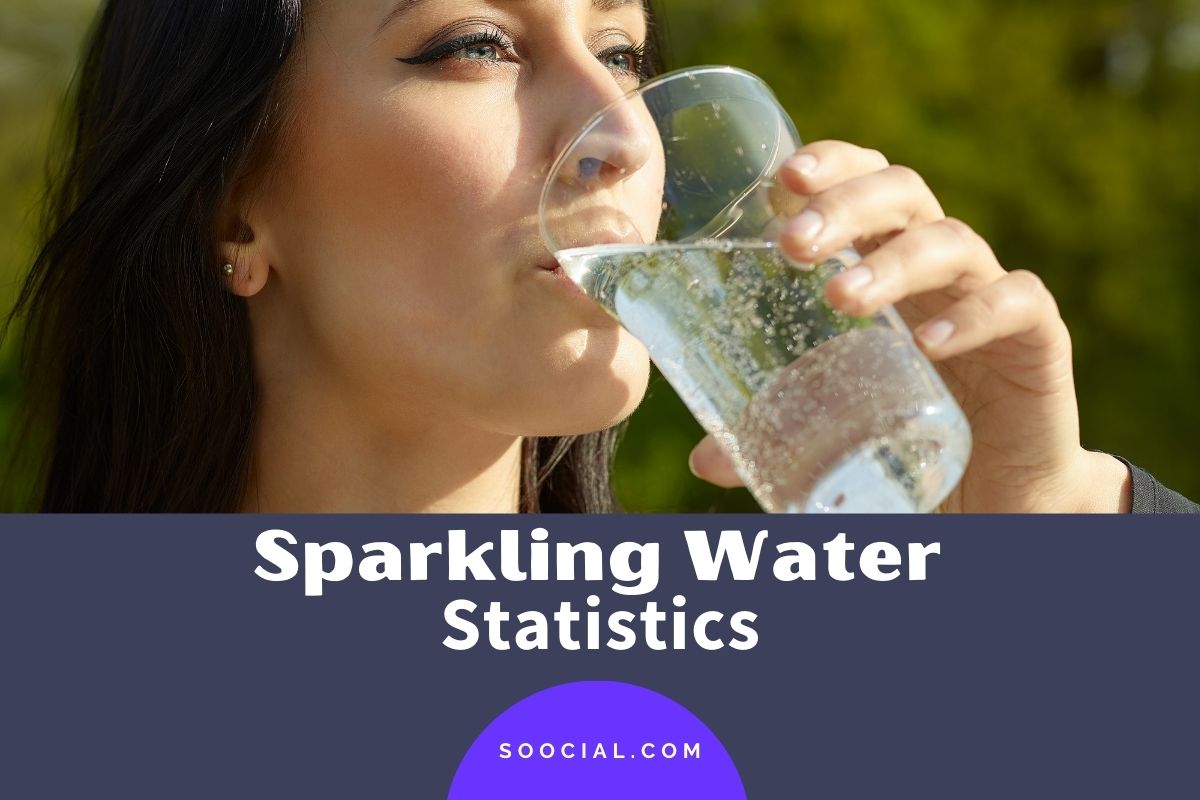 We have no idea how you’re feeling about this, but we’ve been totally obsessed with sparkling water lately.

It’s just so refreshing! And the bubbles are so fun! If you’re not on the sparkling water train (or if you’re the type of person who drinks seltzer to get their sass on), here’s a list of stats about sparkling water that will make you want to take a swig of your favorite bubbly beverage.

What? You don’t have one? Well, what are you waiting for?!

You’ll find all of this and more in our guide to the sparkling water phenomenon. Learn more about the popularity of sparkling water and how it stacks up against other beverages. We know you’ll find it interesting!

We’re not sure if you’ve noticed or not, but sparkling water is everywhere in the United States.

It’s all over your Instagram feed, in your favorite new restaurant, and making its way into every grocery store (even Trader Joe’s now has their own version).

So why all the fizz? And who’s drinking it? We dug deep into all the data we could find to answer these questions and more. Here are stats we compiled about sparkling water in the US.

In absence of data for 2021 and 2020, the only previous forecast of the sort was reported in 2019 when it stood at $3.05 billion. Otherwise, flavored sparkling water retail sales stood at $2.72 billion the year before.

3. Americans are expected to purchase $3.21 billion worth of plain sparkling water in 2022.

When observing sales value growth figures by sparkling water brand between 2020 and 2021, Spindrift ranked second with 73.8%, followed by Topo Chico with 40.4%.

Sparkling Ice recorded a YoY sales value growth of 25%, while the same figure for La Croix stood at 20%.

7. In 2020, Perrier sold 46.8 million units of sparkling and mineral water in US convenience stores.

At 30.6 million, Topo Chico ranked second among sparkling and mineral water brands with the most units sold in US convenience stores.

The list of the top five was rounded by Bubly, Sparkling Ice, and Schweppes, with 18.2 million, 17.6 million, and 7.8 million sold units, respectively.

8. Perrier made $81.9 million in sparkling and mineral water sales in US convenience stores in 2020.

Topo Chico ranked second with $55.9 million, followed by Sparkling Ice and Bubly with $27.3 million and $25.9 million.

The list of the top five brands with the most sparkling and mineral water sales in US convenience stores was rounded by Schweppes which made $12.9 million.

9. At 26.29%, sparkling water was mostly paired with chips in US restaurants.

At 2.07%, berries also made it on the list of common sparkling water pairings in restaurants, followed by bread and cake at 1.63% and 0.92%, respectively.

10. Sparkling water accounts for 0.03% of the average American diet.

Even though it recorded a 34.06% year-over-year growth in consumption between the same month in 2021 and 2022, sparkling water is mostly consumed at home.

On the other hand, its popularity among restaurants stands at 7.14%, with the highest consumption penetration recorded in coffee shops, at 12%.

11. Sparkling water is the most popular beverage ingredients in US restaurants.

12. The average cost of sparkling water in US restaurants is $3.45.

North America holds the largest share of this market at over 35%, followed by Europe.

The global sparkling water market is expected to reach $55.298 million by 2028, growing at a compound annual growth rate (CAGR) of 11.7% during the same period.

14. Millennials in their twenties and thirties are among the groups most interested in sparkling water.

You know what they say: you’re never too young to take care of your health!

Recent studies have shown that the most health-conscious millennials, aged 25 through 34, are the key target market (demographic) for sparkling water

This has been attributed to the fact that these younger generations have grown up with an emphasis on wellness, especially when it comes to eating clean. They are more likely to be aware of what’s in their food and drink, which leads them to make healthier choices overall.

Even if you’re not part of this age group, you should consider swapping out your soda for some bubbly instead!

15. Sparkling water expenditure per capita in Belgium stands at €16.

In absence of data for 2021 and 2020, the only previous forecast of the sort was reported in 2019 when it stood at $438.2 million. Otherwise, flavored sparkling water retail sales stood at $383.4 million the year before.

18. The average household sparkling water expenditure is 249 DKK in Denmark.

The latest statistics report that this figure, recorded in 2020, was the same in 2019. The average household sparkling water expenditure between 2010 and 2018 stood at around 176 DKK.

19. The number of consumers drinking sparkling mineral water in France dropped to 4.287 million in 2020.

20. Unflavored sparkling water accounts for 15.6% of the total of 8.5 billion liters of water sold in France.

Fruit drinks/juices/nectars ranked second at 49.7%, followed by coffee at 43.5%. Cola drinks and pils/export beers rounded the list of the top five most popular drinks, at 38.8% and 35.8%, respectively.

22. At a sales volume of 4.2 billion liters, sparsely carbonated is the most popular mineral water type in Germany.

The latest statistics point to a steady decline since 2016 when 8.6 million UK consumers drank sparkling water. The 5-year average between 2016 and 2020 stood at 7.9 million consumers.

The latest figures indicate that in 2020, mineral water consumption trends have been steadily decreasing since 2010 when this figure was at 60%.

The average sparkling water portion among the total mineral water consumption in Hungary between 2010 and 2020 stood at about 46%. On the other hand, the corresponding figure for semi-sparkling mineral water stood at a little under 8%.

27. The average retail price of a liter of sparkling mineral water in Italy is €0.21.

28. Italian super and hypermarkets sell a little over 1 billion liters of effervescent mineral water, accounting for €260 million in sales value.

29. With an import value of ¥8.8 billion, France is Japan’s leading supplier region of mineral and carbonated water.

In 2020, the US ranked in second place with an import value of ¥5.5 billion, followed by Italy with ¥1.3 billion. The UK and Germany rounded the list of the top five mineral and carbonated water supply regions to Japan, at ¥441.2 million and ¥332.5 million, respectively.

30. 49% of consumers in the Netherlands said they were occasionally drinking mineral water in 2021.

When observing consumers by age group, mineral water was most popular among Gen Zers with 35% of them saying they drank it occasionally. The same applied to 24% of Gen Xers, followed by Baby Boomers (20%) and Millennials (19%).

At 39.9%, Jeju Samdahsu was the most popular South Korean bottled mineral water brand in 2021. Nongshim Baksansu followed with 20.9% of consumers, while other brands reported less than 14% each in popularity among consumers.

The statistics obtained in 2020 point to an insignificant difference when compared to 2019, while the 7-year average between 2014 and 2020 stood at 3.9 million consumers.

Well, that’s it for now!

We’re so glad to have you along for the ride as we track this exciting new trend.

It’s difficult to think of a beverage that has risen so quickly to such a lofty perch. Only 14 years ago, LaCroix was the only sparkling water commonly available in the United States. Today, the market is flooded with hundreds of brands selling sparkling water.

As with any fiery new trend, there are plenty of questions about whether this will last. But anyone who reads these statistics would be hard-pressed to bet against sparkling water. It is clear from these stats that this is not a passing fad; rather, it’s a drink that permeates every aspect of our lives.

With the trend still going strong, who knows where the future of sparkling water will take us? We can’t wait to see what happens!

We hope you found this post helpful for your research! If you have any questions about our stats or want us to dig deeper into a certain area, just let us know by emailing us.

Spritzing a little bit of fizz into your life is a great way to add a little extra fun to your routines, so try one of these options out today!

Thanks so much and see you soon!

25 Functional Food Statistics To Get You Buzzed About Eating Healthy